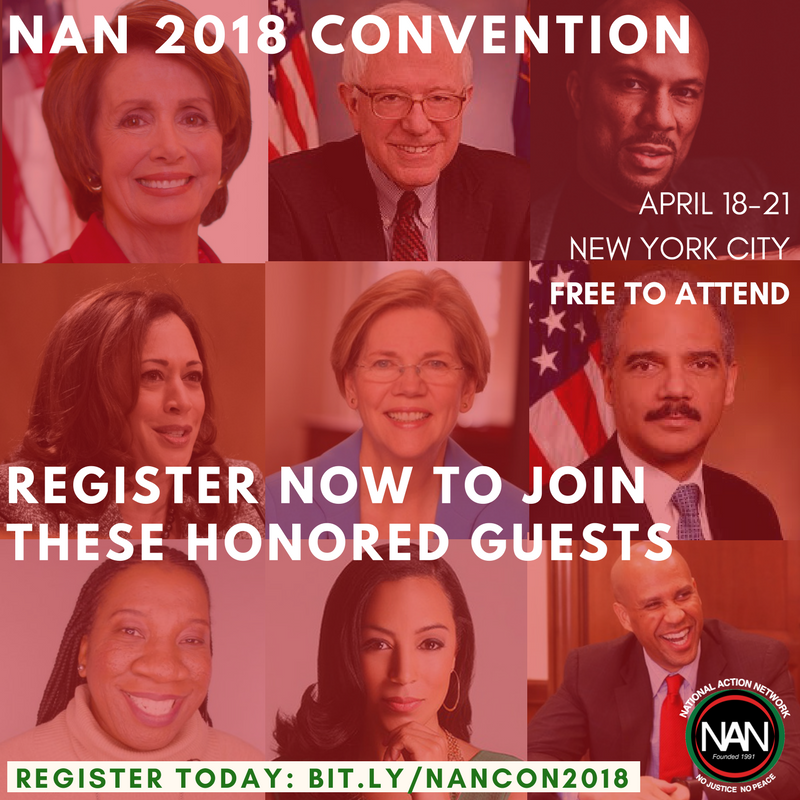 NEW YORK (March 21, 2018) — Civil Rights leader Rev. Al Sharpton today unveiled the preliminary schedule for the National Action Network Annual Convention, taking place at the Sheraton New York Times Square Hotel from April 18-22. The Convention, the largest of its kind in the country, will welcome civil rights leaders and allies from around the country as the civil rights community refocuses its efforts to resisting a hostile presidential administration in the upcoming midterm elections.

The NAN convention will bring together influential national leaders from the civil rights movement, government, labor, religion, business, media, the Black church and the activist community – to reflect on King’s legacy and impact while celebrating today’s civil rights leaders and examining the path forward
** Members of the media interested in attending and covering the convention should register for credentials at the following link: https://goo.gl/forms/dY5hPrby7oiTp4f62 **

11:00 am – 12:30 pm
WHAT IS THE STATE OF THE UNION UNDER TRUMP?
Moderator:
Rev. Al Sharpton, President & Founder, National Action Network
Panelists:

Cheryl Wills, Host, In Focus with Cheryl Wills on NY1
**More to be added**
11:00 am – 12:30 pm
DAUGHTERS OF THE MOVEMENT
Moderator:
Dominique Sharpton, National Director of Membership, National Action Network

National Action Network is one of the leading civil rights organizations in the country with chapters throughout the entire United States. Founded in 1991 by Reverend Al Sharpton, NAN works within the spirit and tradition of Dr. Martin Luther King, Jr. to promote a modern civil rights agenda that includes the fight for one standard of justice, decency and equal opportunities for all people regardless of race, religion, nationality or gender.

For more information go to www.nationalactionnetwork.net.