It shows just how much the party has moved on energy and climate change. 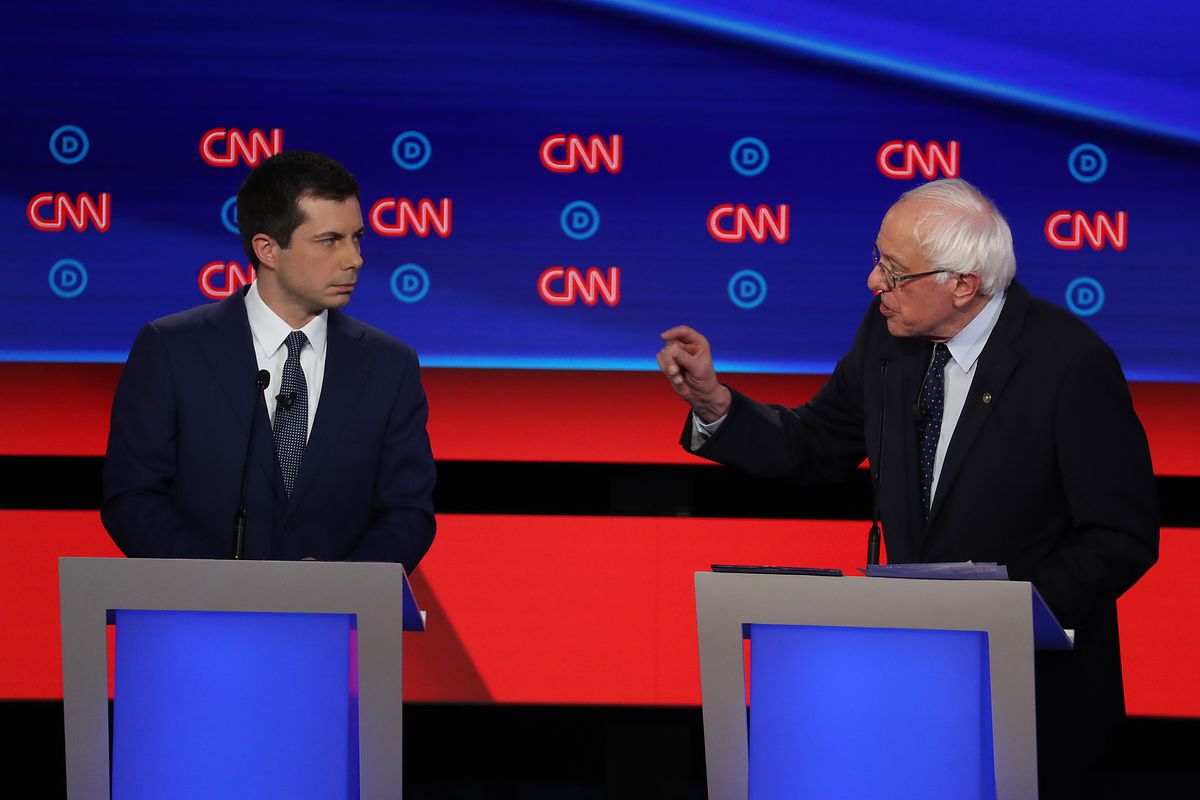 Sen. Bernie Sanders repeatedly called out the fossil fuel industry as the adversary in the fight against climate change, during the second round of the Democratic presidential debates.Justin Sullivan/Getty Images

In a stark shift since the last campaign cycle, a significant number of Democratic candidates for president are now aggressively treating the fossil fuel industry as an adversary in the fight against climate change.

“We have got to be super aggressive if we love our children and if we want to leave them a planet that is healthy and is habitable,” Sanders said. “What that means is we got to take on the fossil fuel industry.”

It’s a big shift in rhetoric since the Obama years, when the United States experienced a surge in domestic fossil fuel production with the advent of hydraulic fracturing for oil and natural gas. Democrats at that time were saying natural gas could serve as a bridge fuel to a low-carbon future. President Obama himself bragged about low gasoline prices during his 2015State of the Union address.

And leaked emails showed that the last Democratic nominee for president, Hillary Clinton, defended fracking and disparaged environmental activists. “They come to my rallies and they yell at me and, you know, all the rest of it,” Clinton said in a 2015 speech. “They say, ‘Will you promise never to take any fossil fuels out of the earth ever again?’ No. I won’t promise that. Get a life, you know.”

Since then, the climate crisis has worsened, the Trump administration has abdicated all responsibility, and climate scientists have sounded a shriller alarm about how little time we have left to avert catastrophic warming. In response, climate activists, like the Sunrise Movement, have been pushing for more ambitious climate policies. And the Green New Deal, which most of the Democratic candidates endorse, has emerged as a powerful framing device for decarbonizing the US economy.

All of this momentum — plus polls showing Democratic voters are worried about climate change — appears to have propelled many of the candidates into making it a top-tier issue. The push to prioritize climate change — and more directly challenge the political power of the fossil fuel industry — has been so strong that it’s carried almost all of the candidates along with it.

Even candidates from big oil and gas states have pledged to refuse donations from the fossil fuel industry. To date, 21 candidates have signed a “no fossil fuel money” pledge.

But not all the 2020 Democrats appear ready to lock horns with dirty energy. Montana Gov.Steve Bullock, who is pitching himself as a Democrat who won in a state that voted for Trump, said he feared losing support from workers in those industries. “As we transition to this clean energy economy, you have got to recognize there are folks that have spent their whole life powering our country,” he said during the debate. “And far too often Democrats sound like they’re part of the problem.”

Former Colorado Gov. John Hickenlooper’s climate change proposal doesn’t mention “fossil fuels” once, but touts his record of working with the oil and gas industry to limit emissions of greenhouse gases like methane.

The question then is whether this rhetoric in the primary will still carry on through the general election, and if it will translate into any concrete action against companies that extract and sell fossil energy.

So if debate moderators want to highlight how candidates stand apart on an issue that’s a high priority for many primary voters, it would behoove them to ask how contenders see the fossil fuel industry fitting into their visions for the future.