I’ve lived my entire life in one of America’s most polluted ZIP codes: 48217, on the southwest side of Detroit.

My neighbors and I have been breathing in benzene, sulfur chloride, and hydrogen sulfide for years. Why? Because of racist policies that force majority-Black neighborhoods like mine to bear the brunt of pollution. I’ve seen neighbors in their 20s die of cancer. I lost my mother and my father to cancer. I am a survivor.

In 2020, Joe Biden won the support of Black voters in part because of his promise to cut pollution and direct 40% of environmental investments toward communities hit first and worst by the climate crisis. Now, with the American Jobs Plan, Congress has a chance to make good on those promises.

The unserious, unacceptable Republican infrastructure “plan” is another story—and Democrats shouldn’t touch it with a 10-foot pole. The GOP plan would do nothing to fight the environmental racism that’s harmed the health of my family and my community, and it would increase pollution for all Americans (regardless of ZIP code). 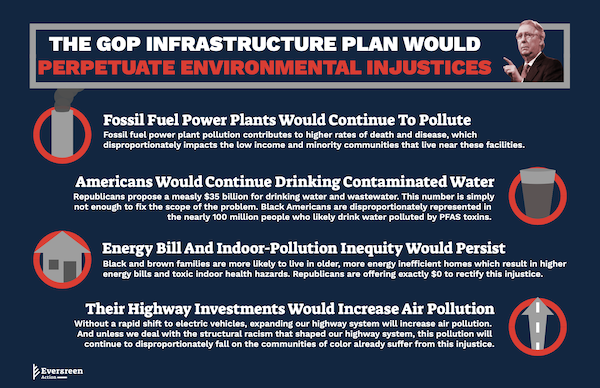 Will you help me spread the word about how unacceptable the Republican plan is? Share Evergreen’s graphic with your friends and family on social media today.