Washington (CNN)President-elect Joe Biden has appointed John Kerry as his special presidential envoy for climate, underscoring his commitment to tackling the global crisis and offering a symbolic rebuke to President Donald Trump’s lack of leadership on the issue.

Kerry, who was President Barack Obama’s secretary of state, will be a Cabinet-level official in Biden’s administration and will sit on the National Security Council.
“This marks the first time that the NSC will include an official dedicated to climate change, reflecting the president-elect’s commitment to addressing climate change as an urgent national security issue,” the Biden transition team said in a statement on Monday.
The elevation of the issue in Kerry’s appointment previews a shift in policy and approach from the current President’s repeated denial of the scientific reality of the crisis and systematic rollback of environmental policies.
Biden introduced Kerry at an event on Tuesday in Wilmington, Delaware, alongside other key foreign policy and national security nominees and appointees.
“Mr. President-elect, you’ve put forward a bold transformative climate plan. But you’ve also underscored that no country alone can solve this challenge. Even the United States, for all of our industrial strength, is responsible for only 13% of global emissions. To end this crisis, the whole world must come together. You’re right to rejoin Paris on day one, and you’re right to recognize that Paris alone is not enough,” Kerry said at the event, referring to the landmark Paris climate agreement.
“At the global meeting in Glasgow one year from now, all nations must raise ambition together or we will all fail together,” he continued. “And failure is not an option.”
The energy around the issue of the climate crisis has escalated in a short period of time. When Sen. Bernie Sanders of Vermont, during his first presidential campaign in 2016, called climate change the foremost national security crisis, he was pilloried as not being serious about foreign policy. Five years later, the White House will have a special envoy for climate with a seat at National Security Council meetings.
Kerry has long worked on climate issues. As secretary of state, he played a key role in negotiating the Paris agreement, which was adopted by nearly 200 nations in 2015 and was aimed at addressing the negative impacts of climate change. Trump withdrew the US from agreement, and Biden has pledged to rejoin it on his first day in office.
In 2019, Kerry co-founded a bipartisan initiative of world leaders and celebrities to combat the climate crisis called World War Zero. In the wake of the Democratic primary, he was a co-chair of the Biden-Sanders unity task force focused on producing policy recommendations on climate, along with Rep. Alexandria Ocasio-Cortez of New York.
The co-founder and executive director of a leading progressive group on climate, Sunrise Movement, congratulated Kerry on his appointment and said the creation of the role was an “encouraging sign.” Varshini Prakash, who served alongside Kerry on the unity task force, described him as “committed to engaging and listening to young voices — even when we might not always agree — and ensuring we have a seat at the table.” 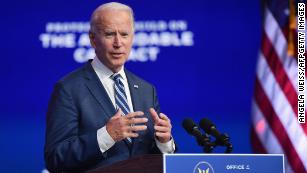 Here are 10 climate executive actions Biden says he will take on day one
But Prakash said the one role was “not enough” and that Biden’s White House “must also include a domestic counterpart reporting directly to the President to lead an Office of Climate Mobilization.”
The President-elect is expected to have a White House climate director working on domestic issues who will be on equal footing with Kerry, a source familiar with the matter confirmed to CNN.
This is not the first time the White House will have a “climate czar,” though Kerry’s role, with him also sitting on the NSC, is different in design.
When President Barack Obama took office, he appointed Carol Browner — the former EPA administrator under the Clinton administration — as “climate czar” to coordinate the administration’s energy and climate policy from the White House.
Among Browner’s accomplishments was spearheading a successful landmark deal with US automakers in 2009 to impose higher fuel-efficiency standards on new cars and trucks. But the Obama administration’s climate priorities were met with resistance in Congress, and a comprehensive climate and energy bill — which included cap-and-trade provisions — collapsed in 2010 when it failed to pass the Senate. Browner served in the climate czar role from 2009 to 2011.
Kerry served alongside Biden in the Senate for decades. He was first elected to the Senate to represent Massachusetts in 1984 after serving as lieutenant governor of the state under Gov. Michael Dukakis.
In 2004, Kerry won the Democratic nomination for president before losing the general election to incumbent President George W. Bush. In 2009, when Biden became vice president, Kerry took over his role as chairman of the Senate Foreign Relations Committee. He was nominated to serve as secretary of state by Obama in 2012.
Kerry served in the Navy in Vietnam as a gunboat officer on the Mekong Delta and was awarded the Silver Star, the Bronze Star and three Purple Hearts.
Biden has proposed an ambitious plan to spend $2 trillion over four years on clean energy projects and to end carbon emissions from power plants by 2035. The President-elect’s legislative agenda on climate will largely depend on whether Democrats gain control of the US Senate, however, which will be decided in two runoff elections in Georgia on January 5. But regardless of which party controls the Senate, Biden has pledged on day one to sign a series of climate executive orders, which will not require congressional approval.
This story has been updated with additional developments Tuesday.

CNN’s Arlette Saenz and Greg Krieg contributed to this report.