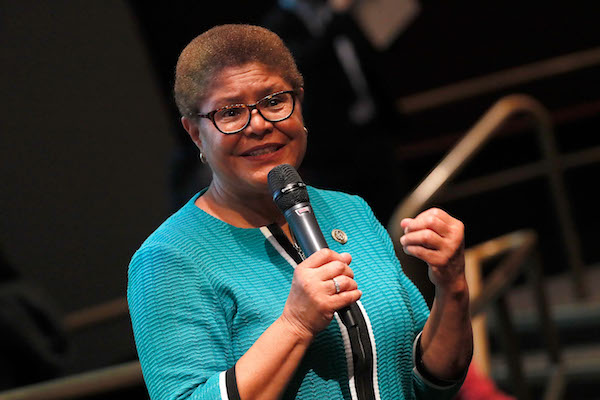 First of a two-part series

The Congressional Black Caucus (CBC) continues to convene teleconferences with the Black Press, elected officials, nonprofits and other interested African Americans providing updates on how the coronavirus pandemic has impacted the lives and livelihoods of the Black community and what the future may hold.

Rep. Karen Bass (D-Calif.), CBC chair, led the most recent conversation March 20 which focused on the stimulus bill (estimated to be a package totaling $1-2 trillion) which Congress hoped to approve in the coming days, the Census and the 2020 vote.

“We’re in crisis across the nation but we cannot lose momentum,” Bass said, referring to the importance of African Americans to reply to recently-mailed questionnaires from the U.S. Census Bureau as well as registering to vote and preparing for the general election in November.

“We really want to hear from you so you can tell us how the pandemic and economic crisis are impacting the Black community in the District and across the U.S.,” she said.

She further acknowledged what remains prominent among the challenges facing Blacks and others including the elderly, the homeless, the incarcerated and the infirm who routinely find their issues placed on the back burner in America — their health.

“Naturally, our folks want to know, quite simply, how they can keep themselves safe from the coronavirus,” she said. “But members of the CBC remain committed to making sure that as the third stimulus package becomes fine-tuned and approved, that the bailout helps those who clean our airports or provide services as hourly employees first before any financial assistance goes to the airlines.

“If Congress doesn’t protect the most vulnerable members of our society, then we’re prepared to vote against any proposed legislation,” Bass added.

Two associate professors at the University of Virginia School of Medicine [UVASM], both Black, joined the teleconference to answer questions and clarify misconceptions about the coronavirus.

“COVID-19 is a member of the coronavirus family with each strain as far reaching as the common cold,” said Dr. Ebony J. Hilton, UVASM, Anesthesiology Dept. “But it’s this newest strain spread mostly through air droplets, which no one has been able to secure an immunity, which is highly-more contagious than the flu and which since its emergence has proven to be far deadlier than any we’ve ever experienced.

“The infection rate for COVID-19 is 2.5 times higher than that of the flu which causes about 56,000 deaths in the U.S. each year. In comparison, the Centers for Disease Control estimate the death rate from coronavirus could be from 200,000 to as high as 1.7 million Americans by year’s end. We hope we can steer people to realize just how deadly this virus is,” Dr. Hilton said.

Dr. Hilton said beliefs about coronavirus being more dangerous for the elderly remain misleading if not inaccurate.

Should Americans follow recommendations related to the practicing of social distancing? Dr. Hilton says, “definitely,” especially if you live in highly-populated areas.

“In the U.S., we face both a health and a financial crisis, especially in urban areas which are highly-populated by Black and brown residents — 22 million, or 80 percent of the American population, represent urban dwellers — that equates to between 160 and 200 million Americans becoming infected,” Dr. Hilton emphasized.

“Without adhering to social distancing and being diligent in checking for symptoms and getting tested — all ways to better contain the virus — we may see as many as 1.7 million Americans not living to see 2021.”

Dr. Taison Bell, UVASM, Infectious Disease and Pulmonary Critical Care Medicine, answered questions about how the coronavirus is impacting Blacks. So far, he said, data released from the CDC has been highly objective and not indicated if Blacks, who already represent the top tier from among eight-of-thirteen leading causes of death in the U.S., despite representing less than 14 percent of the total U.S. population, represent greater numbers of those infected by or succumbing to the coronavirus.

“We cannot say whether Blacks are being tested at rates equivalent to whites,” Dr. Bell said.

“In most areas, what we’re seeing is three criteria that tend to raise one’s chances of being tested, particularly given the inadequate number of test kits currently available: wealth, white and womb-less [a woman without children]. We’re still hoping that both the CDC and the W.H.O. will make the testing rates and related information more transparent,” he said.

In his comments about testing, Dr. Bell further noted frustrations for health care providers and hospital systems being further stymied due to the delay of America in recognizing the severity of the coronavirus.

“At this point, we’re in different stages of the virus — we’re well beyond the ability to contain it and have now entered mitigation — that’s advising maintaining a distance of six feet or more to help flatten the curve and slow the capacity. Still, it’s spreading rapidly in urban centers (New York City has now become the epicenter of COVID-19 in the U.S.),” he said.

“Also, we’re still in high flu season which puts additional strain on our hospitals which are already at an inadequate capacity for beds,” Dr. Bell said. “Now we’re focusing on access to resources, access to care and the unique characteristics of the virus which collectively make this such a highly-contagious and fast-spreading virus.”

In part two of this series, we will look at the issues raised by the Black business community and leaders including words from Rep. Hakeem Jeffries (D-New York) and how the pending stimulus package (which was still being vetted as this edition went to press) will benefit African Americans, manly of whom work in the service industries or are part-time employees. Comments and questions will further address food and water deserts in the nation as well as concerns about housing shortages and the challenge Black families continue to face in paying utility bills or securing the Internet.