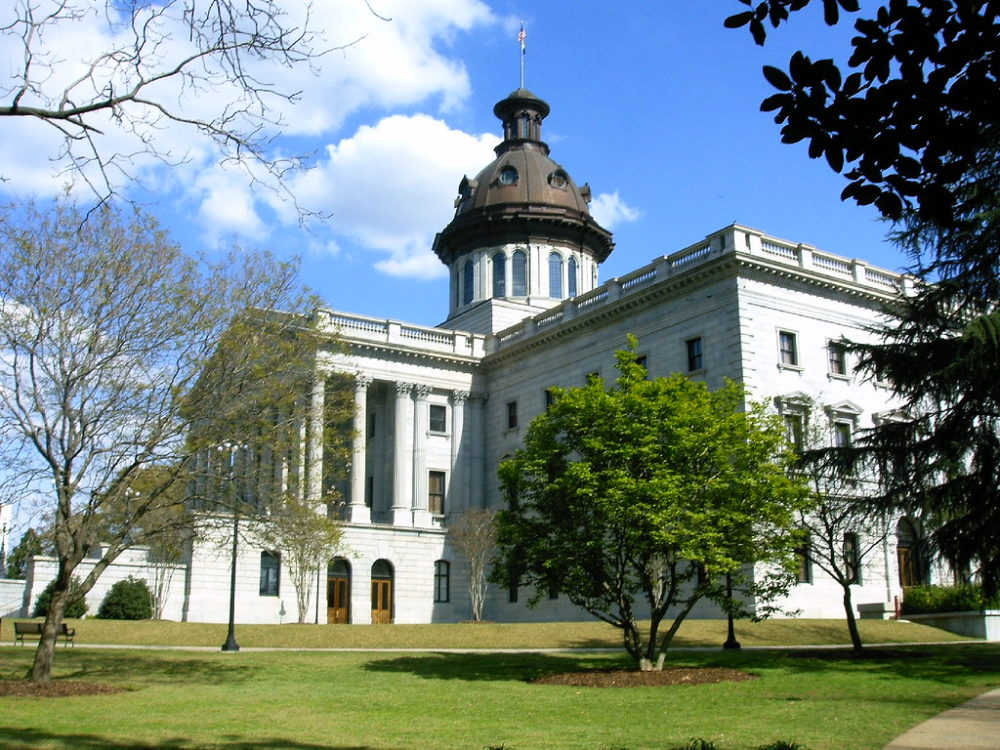 The South Carolina Statehouse in Columbia.

Now more than ever, renewable and resilient energy systems are key to ensuring residents have access to reliable energy infrastructure in the event of a power outage.

Hurricane season is here, and South Carolina is no stranger to the devastating impacts that natural disasters and extreme weather can have on communities. Last year, Hurricane Florence resulted in widespread outages and flooding that continued well after the storm had passed. The year before, Hurricane Irma required a mandatory evacuation for 44,500 coastal residents, left hundreds of thousands of people in the dark, and flooded Charleston.

The recently passed Energy Freedom Act supports a more resilient, clean energy future for South Carolina by supporting solar PV and battery storage technologies. The act promotes more economical systems for utility customers and requires utilities to explore the investments in solar-plus-storage generation assets. In both cases, recognizing the monetary value of resilience is an essential piece to further solar-plus-storage development in the state.

Signed by South Carolina Gov. Henry McMaster in May 2019, the Energy Freedom Act, also referred to as Act 62, is the result of years of community and clean energy industry advocacy.

The legislation alters existing policies and programs that had restricted renewable energy growth and creates pathways to renewable energy and resilience in South Carolina. By the time the bill landed on the governor’s desk, stakeholders including the South Carolina Office of Regulatory Staff, legislators and legislative staff, environmental organizations, the solar industry, utilities, and the business community had logged countless hours crafting the language and building support on an unprecedented scale in the state.

In a recent report, Resilient Southeast: Exploring Opportunities for Solar+Storage in Charleston, SC, published by Clean Energy Group and co-authored by Upstate Forever, Southern Environmental Law Center, and Southern Alliance for Clean Energy, the city of Charleston ranked second out of five Southeastern cities for opportunities to deploy solar PV and battery storage (solar-plus-storage). This positive economic outcome can be largely attributed to the state’s solar tax incentive and favorable net metering policies.

However, battery storage adoption remains limited, in part because historically there has existed little state or utility support for customer-sited battery storage. The Energy Freedom Act was highlighted in the report as innovative legislation that could potentially reshape the state’s clean energy market.

Now with the legislation passed, it’s time to dive deeper into the Energy Freedom Act’s potential implications on the renewable energy landscape in South Carolina.

The Energy Freedom Act’s emphasis on utility avoided cost calculation methodology, or the cost avoided by not building another unit of utility-owned traditional power generation, translates into a more favorable environment for adding a technology such as solar-plus-storage that avoids outage costs, which are basically the sum of any costs that were avoided by having backup power during an outage. This highlights a shift in South Carolina’s energy landscape toward embracing resiliency and the monetary gains it can bring to a project.

Additionally, the Public Service Commission (PSC) now has more flexibility in how it evaluates electric utility proceedings and proposals and how improved resilience factors into either. The PSC also has greater access to resources such as technical experts to assist in the evaluation of avoided cost methodologies.

The Energy Freedom Act provides a guideline for utilities to follow when calculating avoided costs, “including, but not limited to, energy, capacity, and ancillary services provided by or consumed by small power producers including those utilizing energy storage equipment.” Not only is battery storage highlighted, the “but not limited to” language opens the door to values of resilience services that storage can deliver and that intervenors can advocate for as a part of the avoided cost calculation.

For example, geographic location and resource type are suggested as variables that could influence an avoided cost calculation methodology. In this instance, small power producers on the hurricane-prone coast, for example, could argue for additional value for energy resilience from deploying storage due to their geography.

In determining if an avoided cost calculation is fair, the PSC is now allowed to hire a technical expert to advise. These consultants are able to request data and information from the utilities and the utilities must comply. The resulting proceedings will be much more transparent.

Additionally, the PSC is not required to accept the recommendation of the expert. Therefore, if the expert does not recognize the resiliency value of solar-plus-storage but an intervenor makes a strong case for it, the PSC can still incorporate the added value into an avoided cost methodology.

Finally, the PSC will revisit avoided cost “at least once every twenty-four months thereafter.” A biennial review ensures that, even if resilience value isn’t factored in initially, there is still an opportunity to incorporate it in the future. This will be increasingly important as energy infrastructure continues to be impacted by the consequences of climate change, and utilities are required to adjust to meet capacity needs with new, cleaner and more reliable technologies.

Why avoided cost of outages matter

Avoided outage-related costs represent the economic value of energy resilience. For a community service provider, avoided outage-related costs could include lost workforce productivity, interruption in services, and loss of critical client communication. One affordable housing provider estimated $2,500 in expenses and service and revenue losses for every hour that the headquarters office endured a power outage.

Unfortunately, determining an estimate for potential avoided outage costs can be complicated and the benefits are difficult to monetize, especially for public services. For these reasons, many state regulatory bodies, electric utilities, and businesses find it challenging to incorporate a value of resilience in project calculations.

However, if state and utility leaders begin recognizing the value of avoiding outage-related costs in project economics in a meaningful way, nonprofit and commercial organizations will likely be quick to follow.

Regardless of the institution, avoided outage-related costs can quickly add up and help to make the economic case for resilience. In fact, one of the most notable findings of the Resilient Southeast report series was that solar-plus-storage was found to be a positive investment for all of the locations and building types analyzed when avoided outage-related costs are factored in.

For example, the analysis showed that a secondary school in Charleston could save an estimated $345,000 over 25 years. That figure is significantly higher than the estimated $171,100 the school would save without factoring in avoided outage cost.

As outlined in the Resilient Southeast report for Charleston, a variety of concerns related to transparency and affordability have hindered customer-sited solar-plus-storage growth in South Carolina. Issues like ambiguity in storage technology eligibility, looming utility caps, questions as to future solar compensation rates, and a general lack of regulatory support for renewable development have worked against solar-plus-storage progress. The Energy Freedom Act addressed many of these issues.

Prior to the passage of the Energy Freedom Act, vague net metering policies left questions as to the eligibility of battery storage.

Net metering regulations qualified “customer-generators” as customer-owned or leased systems which generate electricity from a renewable energy resource. For storage technologies, which discharge rather than generate electricity, the definition left room to challenge the eligibility of battery storage to participate in net metering.

The Act now includes specific language about battery storage within the “customer-generator” definition to include “an energy storage device configured to receive electrical charge solely from an onsite renewable energy resource.” While it may seem a minor alteration, specifically highlighting battery storage as an eligible part of a net-metered system both recognizes the value of battery storage in the larger energy system and opens the door to further development by removing any ambiguity as to eligibility.

Without the cap removal, utilities could have set potentially high tariffs on net-metering participants once the threshold was hit. Current solar net-metering compensation rates were also preserved and extended, allowing customers to continue to be credited at full retail cost through June 2021. Removing caps and preserving and extending retail rate compensation help to ensure that solar remains cost-competitive and uplifts overall solar-plus-storage system economics.

Based on U.S. Energy Information Administration data, there are currently 24 peaker power plants in South Carolina. These plants typically rely on gas or oil and operate infrequently to meet periods of high electricity demand (such as in the summer when everyone turns on their air conditioners).

Despite their infrequent use, peakers disproportionately emit air pollutants and are oftentimes located in densely populated disadvantaged communities already burdened with poor air quality and environmental health hazards. They are also more expensive to operate than their baseload counterparts.

The Energy Freedom Act mandates that all future utility generation facilities can only be built after considering the costs and reliability of multiple generation options.

Nationally, there have already been instances where solar and battery storage are more cost-effective options than traditional power plants. In addition to cost and reliability, an additional requirement that the proposed generation facility must be compared to other generation options in terms of “any other regulatory implications deemed legally or reasonably necessary for consideration by the commissions,” is broad enough to include the consideration of unconventional criteria when reviewing the merits of a generation asset, such as environmental health and emissions concerns.

The Energy Freedom Act also gives regulators the authority to require all-source solicitations for new generation above 75 megawatts. Requiring an all-source solicitation will allow private developers to compete with a variety of energy proposals, including solar-plus-storage, rather than give the utility full decision-making authority on what types of technology options to pursue. The Energy Freedom Act will allow the PSC to require utilities to explore the value and benefits of all generation options, including battery storage and solar-plus-storage.

The Energy Freedom Act in many ways champions renewables and resilience, but there remain challenges to solar+storage development in South Carolina. Stakeholders must now work within the new PSC framework to demonstrate the value of resiliency in real terms, both as a part of avoided cost calculations and as a component of new generation decisions. Nonetheless, the Energy Freedom Act has undoubtably opened the door to more resilient power in South Carolina.