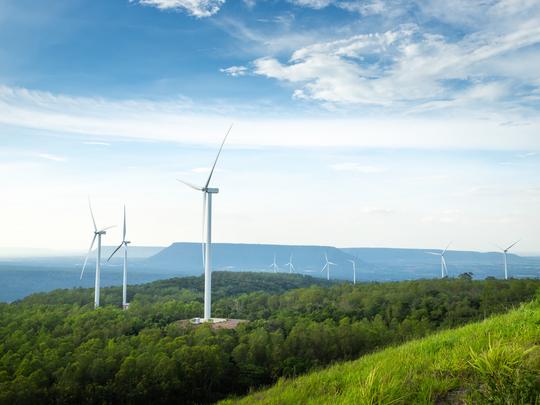 The clean technology industry is gaining attention, investment and momentum on a national scale. But despite Greater Washington’s strong startup ecosystem and talent pool, that sector continues to lag behind other markets.

That’s the consensus among D.C.-area leaders who recognize both how far the green business community has come in recent years — and how far it still needs to go.

The region counts a handful of prominent and fast-growing environmentally focused ventures as its own, even as more early-stage startups emerge in our backyard. The local landscape is “nascent but primed to grow rapidly,” said Patty Simonton, director of Bethesda Green’s Be Green Business program.

And though it’s “getting better,” it’s still “not where it should be,” said Seth Goldman, co-founder and CEO of Eat the Change, and co-founder of Bethesda Green. “When you think about the level of knowledge that exists amongst all of the policy-oriented people who live in the D.C. region, combined with a healthy [venture capital] climate, we should be a more prominent player.”

Seth Goldman, co-founder and CEO of Eat the Change, is also co-founder of Bethesda Green and the former leader and founder of Honest Tea.
Sara Gilgore

It’s not necessarily for a lack of funds, investors or organizations dedicated to startups in the sustainability space.

The Maryland Clean Energy Center launched the Maryland Energy Innovation Accelerator and Virginia’s Center for Innovative Technology rolled out a new energy-focused fund. Accelerators such as Pax Momentum and social entrepreneurship nonprofits like Halcyon increasingly designate slots in their cohorts to climate tech companies. And there’s Potential Energy D.C., a 5-year-old initiative that has evolved with the companies it supports to now entail an incubator and angel network that made its first investments in 2020.

The market is “completely different” today, said Dave McCarthy, its executive director. “Just a few years ago, it seemed like we were the John the Baptist character crying out in the desert eating locusts,” he said. “I wouldn’t say that we’ve quite made it to the land of milk and honey yet, but there are a lot of great companies here in D.C. doing a lot of great things and getting recognized for it.”

But he said while there’s tremendous talent at the Department of Energy, other federal agencies, local labs and think tanks, it remains largely untapped for the commercial market. Bethesda Green, a nonprofit with programming for startups tackling environmental challenges, is also working to change that. It’s now recruiting entrepreneurs for its Innovation Lab, which has recently expanded in its own right.

“The DMV region has been slow to grasp the importance of addressing the causes of climate change through innovative, commercial solutions over the years, but the word is finally getting out,” Simonton said. “The founders have always been there, researching and developing solutions. It’s just that now the ecosystem is better prepared to support them.”

The industry’s progress and potential

Experts agree Greater Washington could become a clean tech powerhouse — if it can finally address its long-standing gaps in converting its research and knowledge into revenue-generating products.

Areas such as Boston have long mastered that tech transfer far better than the D.C. area. That’s what “drove much of New England’s economic growth in the technology space,” said Goldman, who grew up in the Boston area. “We need the universities and think tanks in D.C. to collaborate with local authorities to facilitate that same kind of transformation.”

Policy, particularly in D.C., has been critical to advancing this work. Mayor Muriel Bowser, in 2019, signed legislation that environmentalists widely hailed as one of the more ambitious municipal efforts in the country to combat climate change, in part mandating that all electricity sold in the city come from renewable sources by 2032 and that property owners make significant changes to their buildings to increase energy efficiency or face big fines, starting this year for some landlords.

On a federal level, the Trump administration’s budget negotiations included an extension of the investment tax credit for solar energy projects, which “helps to continue the boon for developers, hardware manufacturers, and investors large and small,” McCarthy said. The Biden administration’s pro-climate-tech stance also benefits local companies, particularly in hydrogen and storage tech, he said.

“We expect that currently developing federal legislation to promote climate change, infrastructure, corporate responsibility, income inequality, and social justice will provide incentives and responsibilities for District of Columbia businesses,” said Jeffrey Lesk, senior counsel with Nixon Peabody LLP, who has been working on renewable energy projects at the firm. “We believe this will provide an attractive landscape for businesses to incorporate solar — particularly socially-oriented solar programming — into their business planning.”

As to what that means for the region’s innovation economy?

“Clean tech is sexy again,” said Kiran Bhatraju, CEO of Arcadia, a D.C. clean energy startup. “And with the climate getting hotter every year, it’s not only necessary, but good business, to invest in solutions that will help us manage living on this earth sustainably.”

Take Arcadia, which launched in 2014 with a platform that lets residents better manage their utility accounts and, thus, their energy usage. The company manages community solar projects, which allow anyone to get cheaper and cleaner energy at home if they can’t install or afford solar panels because they rent or the roofs don’t allow it, Bhatraju said. Its model doesn’t require credit checks or long-term contracts so it’s accessible to everyone “regardless of economic status,” he said.

This year, Arcadia is working with federal and state authorities to expand access to community solar, currently limited to 19 states that have passed legislation around it. It’s also continuing to hire for engineering, marketing, analytics, member experience, product design and product management roles, adding to 138 employees in the District and New York City, where it’s preparing to open an office. That’s after Arcadia made its first acquisition, Houston’s Real Simple Energy, in March, positioning Arcadia to penetrate the Texas market.

It’s also been successful at the venture game, raising a total $70 million to date, most in 2018 and 2019 from investors G2VP, Goldman Sachs, Energy Impact Partners, BoxGroup, Macquarie Capital and Inclusive Capital, among others.

Another company, Chantilly-based TrueAlgae, founded in 2017 and led by CEO and co-founder Nathaniel Jackson, is also gaining traction for its technology — a closed-loop system that grows microalgae to support sustainable food production, improves crop quality and shelf life, and cuts down the use of chemical fertilizers. The 11-person startup is now seeking funding from institutional investors after raising $3.5 million at the angel level — all in hopes to hire more sales folks to take its product to market.

That capital would also fund research and development, “to better understand how our product works for different crops and soil conditions,” said Angela Tsetsis, TrueAlgae’s chief commercial officer. The company is running dozens of trials in a variety of crops “from potatoes to cannabis,” she said. “Our goal is to convert as many of these trials into paying customers and further increase our reach.”

TrueAlgae is exploring other uses for the algae itself as well, including dietary supplements, food ingredients, animal feed and aquaculture products, Tsetsis said.

And it’s working to license its tech in agriculture markets globally, she said. “Because our system is simple to operate, it is completely feasible to build and train local entities to run our system and work with the local agricultural community.”

Real estate has been a growing focus locally for other energy-focused startups — not surprising given the new mandates on landlords to make their buildings more energy-efficient.

New Partners — funded with equity financing, loans, grants, pro bono legal services and other sources — has also supported a green jobs program for low-income residents of color, among other initiatives, Lesk said. Such efforts are not unusual in the nation’s capital, opening the door for more clean tech progress.

“As a consumer tech company grounded in a global, social and oftentimes political issue, being in D.C. is very important to us,” Bhatraju said. “We benefit from that by drawing from the community and people who want to contribute. It’s a pleasure being surrounded by people who are passionate about change and want to make an impact.”