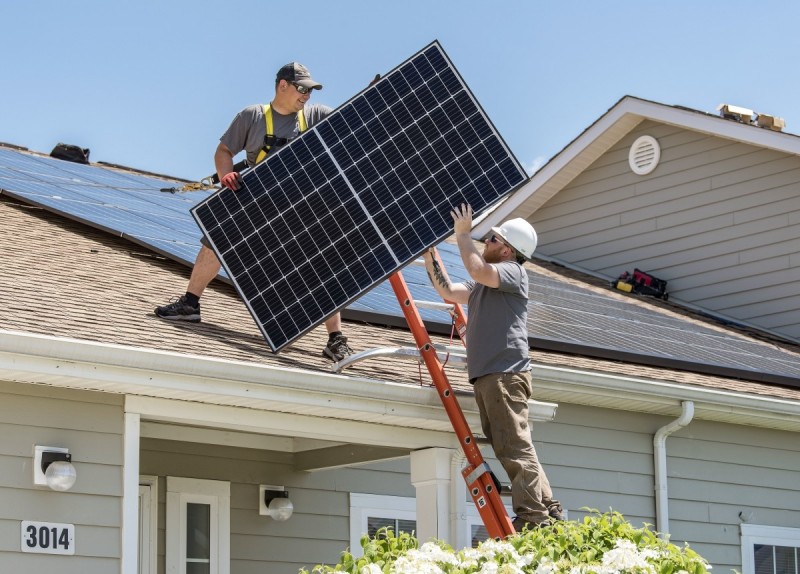 Homeowners may be able to put solar panels on the fronts of their roofs in historic districts, under new sustainability guidelines released by DC’s Historic Preservation Office Friday. HPO may still push homeowners to adjust colors, appearance, and so forth of their panels, but won’t outright prohibit them.

This move follows a firestorm which erupted when the Historic Preservation Review Board, the mayorally-appointed body which makes most preservation decisions,forbade Takoma homeowner Steven Preister from putting solar panels on the front of his house.

Multiple board members said they understood the severity of the climate crisis, but at the same time, they simply weren’t willing to tolerate the level of visual intrusiveness it involved. “I am in favor of sustainability,” said Gretchen Pfaehler, but “this detracts from the slope of the roof.” Chris Landis said “I realize that we are in crisis… But I just have this vision of a row of houses with solar panels on the front of them and it just — it upsets me.”

For years, the presevation office has been working on a document outlining guidelines for integrating sustainability and historic preservation. The drafts extol the fact that reusing an existing building is greener than tearing it down and building a new one. But early drafts also said that green features like rain barrels, green roofs, and solar panels shouldn’t be visible from the street at all.

Slowly, with successive drafts, HPO has revised its language to be more tolerant of sustainability features, but stopped short of actually allowing solar panels on the most visible front of a roof in most cases. Following the Preister case and pressure from inside and outside the government, that has changed.

A press release from the DC government says the newest version of the guidelines “allow for solar on front facing sloped roofs if they are compatibly designed with low-profile panels set flush with and in a complementary color with the roof.” It quotes Mayor Muriel Bowser in saying, “By streamlining the ability to install solar and other green infrastructure in our historic neighborhoods, we are aiming to make Washington the healthiest, greenest, and most livable city in the country.”

The guidelines themselves aren’t quite so explicit. The relevant sections say:

5. If it is necessary to install panels on a primary elevation to achieve solar efficiency, installations should be pulled away from roof edges and ridges, compositionally balanced on the roof, and not result in irregular “saw-tooth” compositions. Use low-profile panels set coplanar and flush with the roof, and panel and panel frames that match the color of the surrounding roof. The use of a solar skin or solar shingles that match the texture and appearance of the roof is encouraged.

Or, is it just that this will be allowed if the front face is the side of the roof with the most sun (so, for instance, people with north-facing houses with sloped roofs can’t put low-performing panels on their north roofs, but for south-facing houses, that’s fine).

This reflects common practice in documents coming from the preservation office, which will readily tell people what they can’t do but never say “you can do this.” At best, they will say, essentially, that a homeowner isn’t not allowed to do something.

In fairness, the preservation office is in fact often quite flexible at working with property owners, and allow a fair amount of development or changes to historic buildings. They simply resist, to the bitter end, ever explicitly writing down that something is okay. They prefer to have applicants bring ideas and then they will discuss. The problem is that leaves homeowners in the dark about what is and isn’t okay, and more at the whims of whether neighbors choose to oppose or support.

Ask the preservation office to be more clear

It’s terrific that the preservation office is allowing solar panels. They should go one step further and clearly say so, period. For instance, it could say “Solar panels may be located on primary elevations if they are south-facing, provided they use low-profile panels.”

Forcing homeowners to set panels away from the edges will reduce the potential for solar generation and seems unnecessary. There will and can be differences of opinion on whether seeing the undersides of panels is so anathema to a historic district, but this kind of thing only makes the panels a little bit more expensive instead of truly cutting down on the power they can create.

They should also allow HPO staff to approve front-facing panels without forcing homeowners to go to a full board meeting. (I’d even more prefer that DC law state that solar panels which don’t damage the roof underneath aren’t subject to historic review at all, but of course the preservation office and board would never voluntarily limit their ability to control anything.)