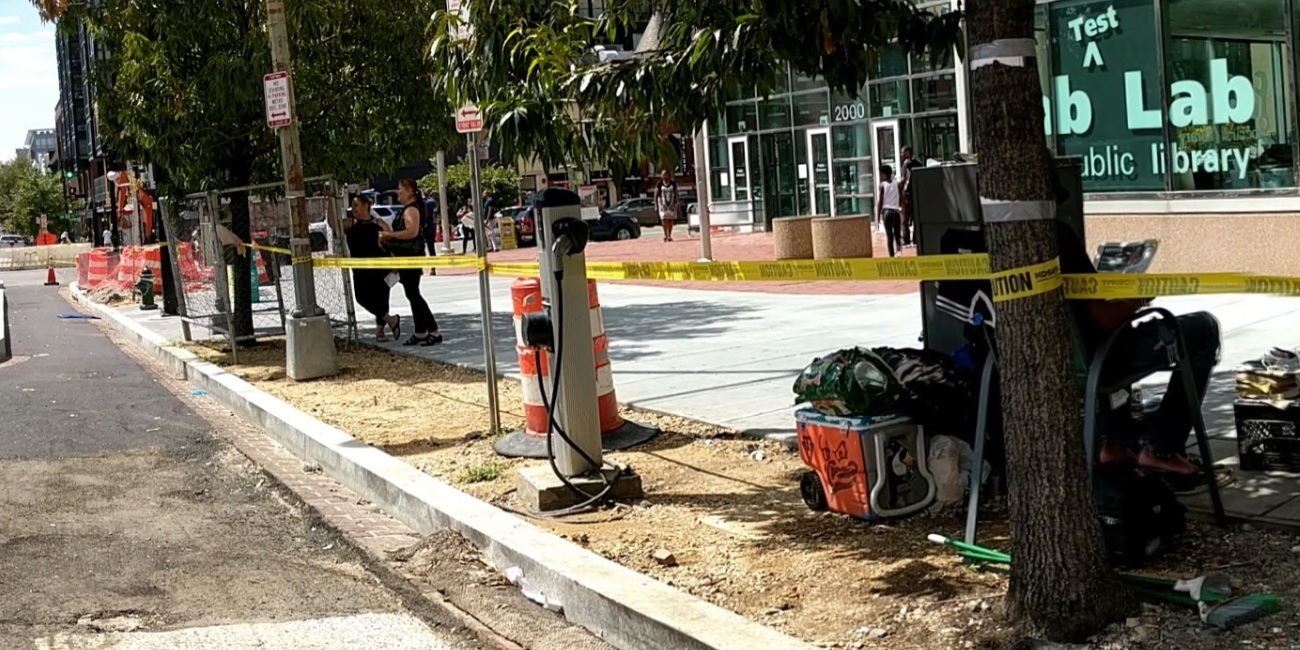 The  regulation was proposed by Jeff Marootian, director of the District Department of Transportation (DDOT), on Friday, February 21, 2020.

The regulation authorizes the director to lease public on-street parking spots for $2,400 per year to private businesses to resell electricity and bill as they like. This is a negligible amount. Private individuals pay an average of $7,200 per year to reserve a parking spot in downtown DC, or $3,000 per year in the residential neighborhoods surrounding downtown.

Private charging companies are invited to apply for the spots. DDOT will not own any chargers going forward, although it currently owns a handful of curbside chargers operated by ChargePoint (14th and U St. NW location shown in header image). Curbside charging is needed in the District, because 70% of residents live in multi-dwelling units without dedicated off-street parking.

Unless the DC Council takes action soon, the EV charging regulation will become law. The public has until March 21, 2020, to submit comments, which can be emailed to publicspace.policy@dc.gov.

Takoma Park, Maryland, sits on both sides of the DC-Maryland border. It was developed this way. Both the DC and MD residents of this neighborhood are served by the same utility (Pepco) and the same public transit system (WMATA). But in Maryland, the utility regulator authorized Pepco to offer Level 2 EV charging for $0.18 per kWh on public rights-of-way, with that price controlled like any other electric tariff. Takoma Park has four of these public Level 2 chargers.

No matter what car — BEV or PHEV — you drive, when you plug in to the Pepco chargers on the Maryland side, you know you’re paying $0.18 per kWh.

District residents likely to pay $2.50 per hour for charging, pricing out charging for many

Residents of Takoma on the DC side of the border are likely to pay a minimum of $2.50 per hour under the proposed regulation. That assumption takes EVgo’s flat $1.50/hr for L2 charging, and adds the District’s $1/hr fee, assuming EVgo is required to remit that fee to the District.

When you consider that the majority of PHEVs can take only 3.3-3.6 kW of charging, that means they’ll be paying roughly $0.80 per kWh. This applies to a lot of BEVs as well, like the Nissan Leaf S trim up to 2018. Paying this much is equivalent to paying $10 per gallon for gasoline.

Pepco applied in August 2018 to the DC Public Service Commission, seeking to deploy neighborhood public chargers in DC. Electrek covered that decision, where the PSC said that under DC law, Pepco had to demonstrate that the needs of EV drivers were not being met by the competitive market before it could operate its own chargers, and that it had not done so.

However, the PSC did authorize Pepco to build out the “make-ready” infrastructure for 35 public neighborhood chargers at DC ratepayers’ expense. This means that DC ratepayers will be subsidizing the private vendors who will now benefit from DDOT’s proposed regulation.

Electrek emailed the DDOT Monday morning with a series of questions. We followed up again Tuesday, and we were told to expect a response by the end of the day. Repeated follow-ups since then have gone unanswered.

There’s so much to dislike here:

While we can’t confirm, it appears that DDOT has proposed this regulation without consulting with any EV driver groups first. It certainly appears as though vendors were consulted, however. We hope the DC Council rejects this regulation entirely, because it’s worse than nothing. People see these public EV charging posts, have heard that driving an EV is supposed to be cheaper than driving an ICE, and then get a rude awakening. This will ultimately hurt EV adoption, and hurt DC’s working poor. The less expensive BEVs and PHEVs are most discriminated against.

The Council should focus on helping DC’s multi-dwelling residents first and foremost. The way you do that is by providing curbside charging at prices that are as close as possible to standard-offer service from the utility. So basically, what Maryland did for L2 charging. As for the tensions about taking away RPP parking spots and dedicating them to EVs, we agree that this is tough politically, and so prefer the plan in London. (Profiled by the Fully Charged, video link) In this situation, instead of trying to reserve a couple spots for EVs, the focus was on widespread deployment elegantly built into lamp posts and bollards, so that residents could likely find a spot every couple days.

You’re reading Electrek— experts who break news about Tesla, electric vehicles, and green energy, day after day. Be sure to check out our homepage for all the latest news, and follow Electrek on Twitter, Facebook, and LinkedIn to stay in the loop. Don’t know where to start? Check out our YouTube channel for the latest reviews.