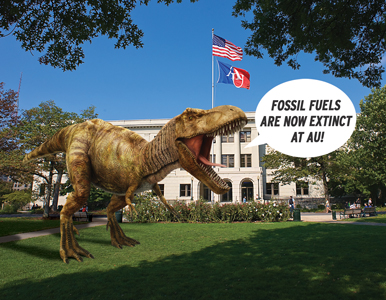 It took millions of years for prehistoric plants and organisms buried beneath layers of sediment and rock to morph into carbon-rich deposits. But it only took six years for AU to divest from fossil fuels.

On April 20—the 50th anniversary of Earth Day—the university announced it had sold $350 million in commingled funds and index funds to complete the divestment. Nonrenewable fuels—coal, oil, and natural gas—supply 80 percent of the world’s energy and are the number one contributor to the carbon emissions that cause global warming.

The Board of Trustees established a fossil-free fund with the university’s endowment in 2014. Since then, AU has carefully divested its public endowment portfolio, replacing fossil fuel holdings with investments with similar performance and comparable or lower fees. The university currently has no Carbon 200 companies in its private investment portfolio but may have small and short-lived positions in the future.

“For more than a decade, AU has been on a campus-wide sustainability journey—something that’s not just part of our mission, but our DNA as changemakers,” says President Sylvia Burwell. “Our actions, from reaching carbon neutrality to the board’s commitment to evolving our investments, will continue to serve as a model for sustainability, further demonstrating our leadership on the issue and how our community can make an impact in the global fight against climate change.”

The announcement came almost two years to the day after AU became the first university in the country to achieve carbon neutrality, and a week after a student referendum encouraging the board to divest from fossil fuels passed with 93 percent of the vote. Students passed a similar referendum in 2013.

“This action underscores our leadership on sustainability while exercising our fiduciary responsibility for ensuring the fiscal health of a great university that has served our nation for more than a century,” says trustee Jeff Sine, SIS/BA ’76, chair of AU’s finance and investment committee. “Our board wants to acknowledge the important work happening throughout the campus to protect the environment and those in our AU community who are taking action on climate change.”