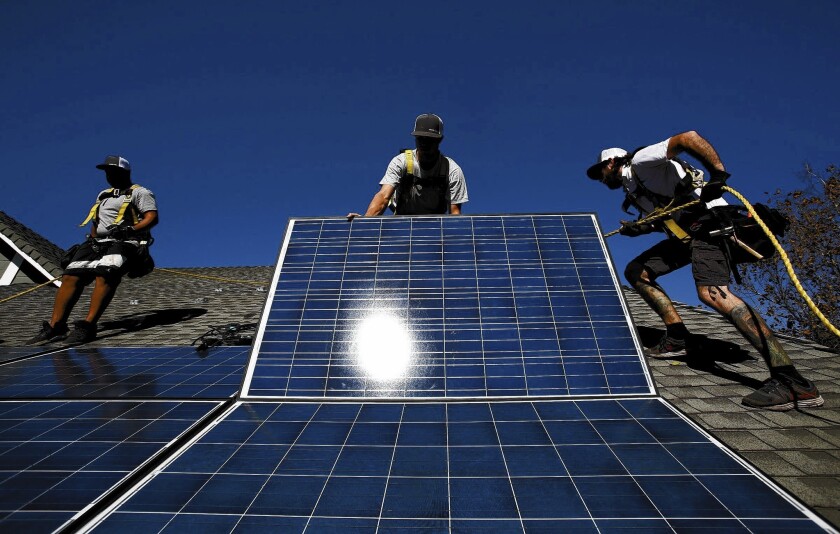 Nate Otto is selling fewer rooftop solar systems these days. Business is down about 50% from a record-setting first quarter for Otto’s Palm Springs-based solar installer, Hot Purple Energy. But he hasn’t fired any of his 48 employees, or cut their salaries. He’s been giving them odd jobs — cleaning trucks, adding security lights — even as he limits the number of people at job sites and takes steps to keep them as far away from each other as possible.

“I’ve done everything I can just to keep the guys busy,” he said.

Otto’s employees are some of the lucky ones.

A report out Wednesday from Environmental Entrepreneurs, a clean energy advocacy group, finds that more than 106,000 clean energy workers filed for unemployment benefits in March — a number that has almost certainly grown over the last few weeks.

Consultants at BW Research who analyzed the numbers also project that the clean energy sector will shed more than 500,000 jobs — or 15% of its workforce — in the months ahead “if no additional actions are taken to support the industries.”

Two-thirds of the people who have lost their jobs so far work in energy efficiency, which includes heating and air conditioning and the installation of efficient lighting and appliances — work that often involves going into people’s homes. Renewable electricity, which includes wind and solar power, was the next most-affected sector, followed by the production of electric and hybrid cars.

California was the hardest-hit state, with 20,000 clean energy workers filing for unemployment in March.

The report from Environmental Entrepreneurs, known as E2, also offered reasons for hope.

The U.S. clean energy sector employed nearly 3.4 million people before the COVID-19 pandemic — three times the workforce of the fossil fuel industry, according to E2. And those numbers were growing quickly. The Bureau of Labor Statistics projected last year that the two fastest-growing jobs in America over the next decade would be solar panel installer and wind turbine technician.

Advocates say Congress has a significant opportunity to jump-start the economy by supporting clean energy technologies.

“What these numbers tell us is that clean energy workers are a huge and important part of America’s workforce — and they are hurting badly,” E2 Executive Director Bob Keefe said in a statement. “Lawmakers simply cannot ignore the millions of electricians, technicians and factory workers who work in clean energy as they consider ongoing economic recovery efforts.”

Keefe pointed to the American Recovery and Reinvestment Act — which pumped $90 billion into solar power, home weatherization and other low-emission technologies during the Great Recession — as evidence that “clean energy can lead the way to recovery.”

Others focused on reducing air pollution and planet-warming emissions are promoting the same idea.

The Breakthrough Institute, an environmental research group based in Oakland, released a report on Tuesday outlining what it described as more than $500 billion in potential federal investments that could be used to fight climate change, all of it proposed in previously introduced bills with bipartisan support. The bills would support solutions such as removing carbon from the atmosphere, large-scale energy storage, tax credits for renewable power developers and electric vehicle charging stations.