Each year, federal agencies track new power plant construction to document how we produce energy. For years, they overlooked the power that customers generated for themselves from rooftop solar. This annual and quarterly report compiles data from the U.S. Energy Information Administration and the Solar Energy Industries Association to illustrate the growing influence of renewable energy, both large-scale and distributed, in the U.S. energy portfolio.

Below are updated illustrations and analysis of national data on new power plant capacity, disaggregated by energy source. We present annual results from 2020 first, followed by more detail from the fourth quarter of last year, as part of our regular quarterly reporting. 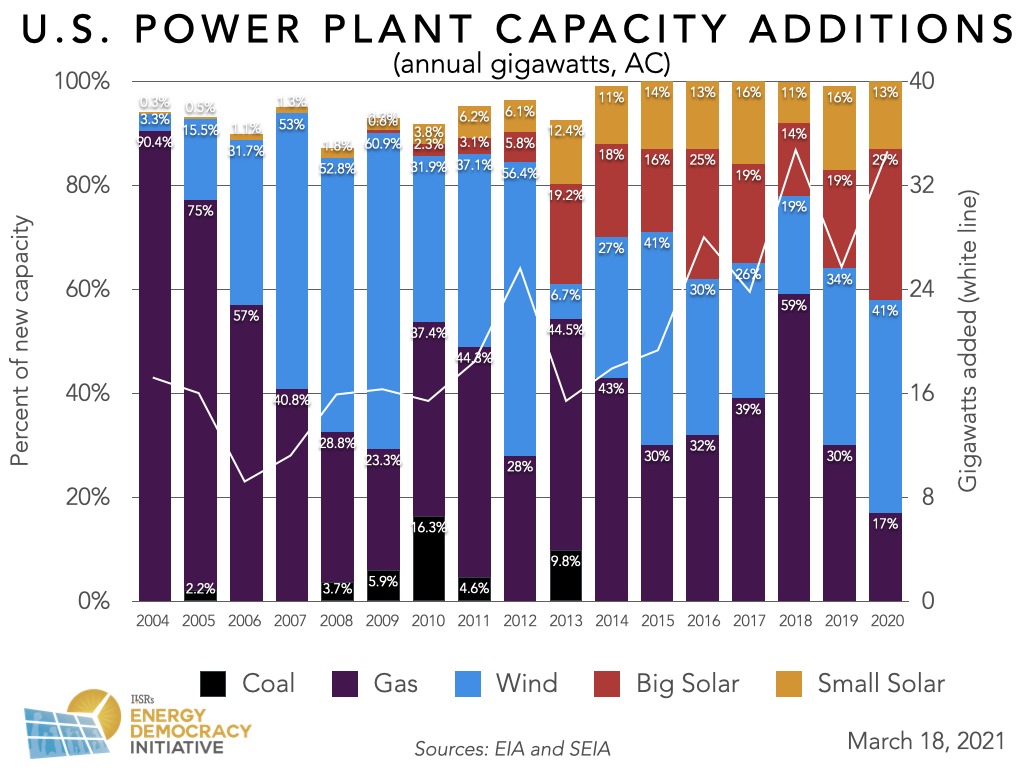 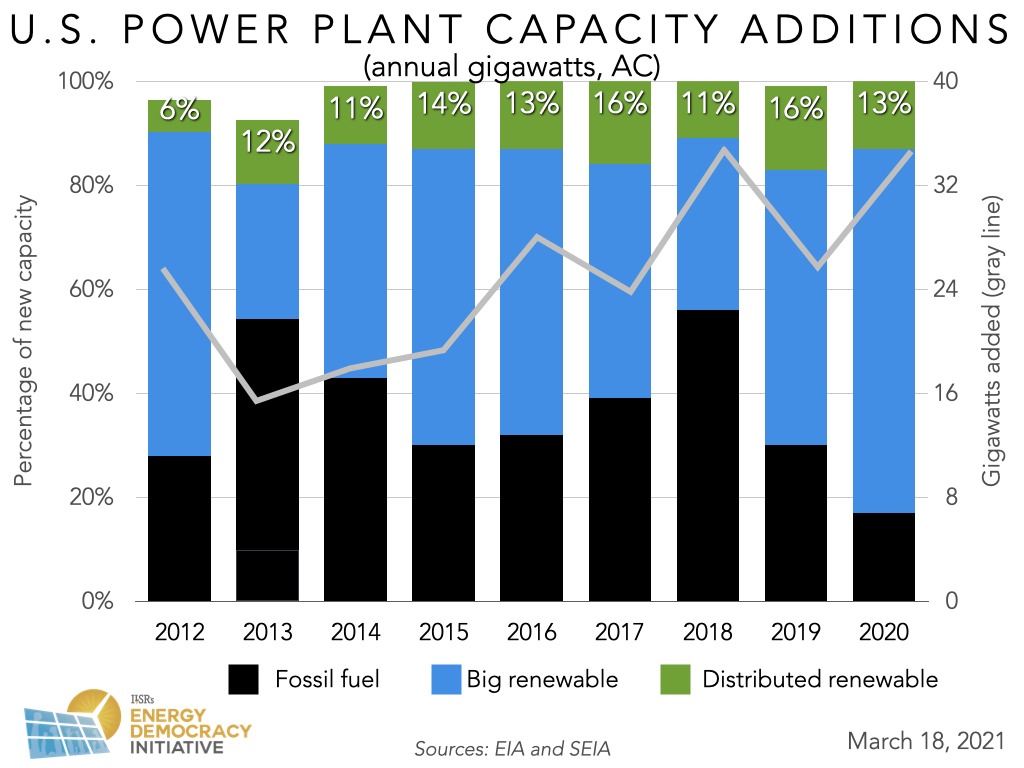 A Record-Setting Year for Renewables

Just over 14 gigawatts of wind were installed in 2020, making wind number one in new power capacity for the first time since 2015. Developers made use of a boosted 60 percent tax credit, thanks to an extension measure passed in 2019. Lawmakers passed another tax credit extension at the end of 2020 as part of the federal stimulus package, so the 60 percent rate will be available for another year.

14 gigawatts of solar were installed in 2020 — five gigawatts more than the nine gigawatts installed in 2019, despite the federal solar tax credit dropping from 30 to 26 percent. Without a further extension, solar developers and customers will have two more years to take advantage of the 26 percent rate (thanks to the December 2020 stimulus package). The credit then decreases to 22 percent and finally drops to 10 percent for commercial projects, phasing out entirely for residential customers.

The COVID-19 pandemic affected the solar industry most in the second quarter of 2020. However, the lag in installations during that time intensified the pipelines for the second half of the year. Utilities also started to recover from interconnection backlogs by the end of the year. The Solar Energy Industries Association believes that this momentum will carry into 2021, as developers are still addressing pent up demand from periods of lockdown. Our research has also foreseen an increase in solar adoption; in Minnesota, given current incentives and electricity prices, we expect residential solar capacity alone to increase 475 megawatts by 2034.

Read about Why Utilities in Minnesota and Other States Need to Plan for More Competition and stay tuned for a 50-state residential solar model, expected release late 2021.

In 2020, distributed solar systems represented nearly a third of new solar installed, accounting for 4.5 out of 14 total gigawatts. This is the most distributed solar ever installed in one year — about ten percent more than 2019’s total of four gigawatts of new small-scale solar. Residential solar developers quickly adapted to a digital marketing model during the pandemic. Additionally, as people spent more time at home, some became more interested in home improvement and energy savings.

In February of 2021, as Texas recovered from a massive grid failure, Texans explored their options for solar and energy storage. Solar installer SunRun saw a 350% increase in traffic to its website in the first week of the crisis, while EnergySage had a 1,400% increase in battery storage-related readership. As storms and natural disasters continue to wreak havoc on centralized energy systems, communities will turn to decentralized, resilient, and renewable energy systems.

Details of the Biden Administration’s economic recovery plan, called “The American Jobs Plan,” were released on March 31, 2021. The plan includes updates to transmission lines, investment in public vehicles, and extended incentives for clean energy generation and storage. ILSR is a partner in the push for a 30 million solar homes stimulus: a plan that would help people save money, create jobs, address energy injustice, and protect our climate.

Given the extension of federal tax credits and the recognized value of solar for economic stimulus, 2021 will almost certainly be the biggest year yet for distributed solar energy.

Find out how much of the U.S. solar fleet is made up of smaller, distributed sources that help communities build wealth locally in our state-by-state visualization, updated March 2021.

Though there has been little offshore wind development in the United States, our research found that 21 states have the potential to generate more than 100 percent of their electricity use with offshore wind alone. The December 2020 stimulus package included a 30 percent investment tax credit for offshore wind projects, which could be a game changer. In March 2021, the Biden Administration announced further plans to accelerate offshore wind development. These plans include permitting in the Atlantic, federal loan guarantees, and financial investments.

See how 47 states could meet 100% of their electricity needs using in-state renewables (including off-shore wind) in our 2020 report.

What will a supportive federal administration, generous tax credits, and a recovering economy mean for renewable energy in 2021? More than likely, this year will see more deployment of renewables than ever before, to the benefit of Americans of all colors and backgrounds. After a year of reckoning with racial, economic, and environmental injustices, polluting fossil gas is just an energy source we can’t afford.

Check out our other summary reports of 2020, including the 2021 Community Power Scorecard and Let’s Talk About Solar, Equity, and Monopoly Power in 2021.

The fourth quarter was 2020’s biggest, with nearly 15 gigawatts of new power generation capacity installed. In fact, this was the most power capacity added in just one quarter since we started tracking the data in 2014. Renewable resources saw quarterly records for new installation. Meanwhile, fossil gas’s slight gain from a meager third quarter meant only 376 megawatts of new gas. Wind made up well over half of the new power generation this quarter, with 8.5 gigawatts installed. New solar capacity doubled from last quarter, with a majority of those gains coming from large-scale solar. With renewables dominating 9 of the last 12 quarters, renewable energy resources have locked in a commanding hold over new power generation.

In the chart below, we illustrate the past two years of new power plant capacity in the U.S., disaggregated by energy source on a quarterly basis. 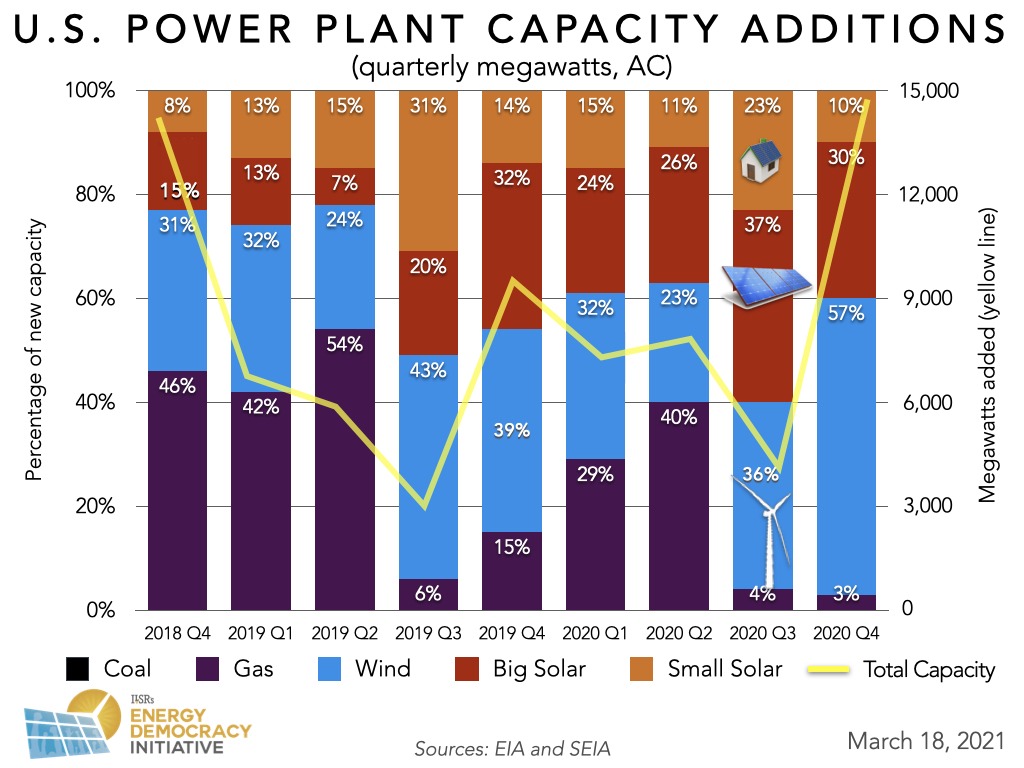 Prior to 2020, 2019 was our greatest recorded year for new wind generation, with 8,859 megawatts of capacity added. In the fourth quarter of 2020 alone, 8,519 megawatts of wind were installed — nearly matching 2019’s record year. At 57 percent, wind also held its largest share ever of new quarterly power generation.

In 2020, wind developers not only hurried to use a tax credit they worried may expire, they also took advantage of a larger credit than was offered in 2019. At the end of 2019, Congress granted a one-year extension to the expiring production tax credit. Importantly, the 2019 measure increased the production tax credit from 40 to 60 percent for wind projects that begin construction in 2020.

Now, it turns out that wind developers will have another year to use the 60 percent credit — thanks to Congress’s December 2020 stimulus package.

Large and small-scale solar each saw record quantities of quarterly installation. Together, they accounted for nearly six gigawatts of new generation capacity this quarter.

The federal solar tax credit dropped to 26 percent of system cost in 2020 and was set to drop again to 22 percent in 2021. The stimulus package passed at the end of 2020 extended the 26 percent rate for another two years, but developers still rushed to take advantage of what they believed was their last chance to get the higher rate.

The COVID-19 pandemic affected development of small-scale solar the most compared to other power generation. However, after taking a dip in the second and third quarters of the year, the small-scale solar industry has made a recovery.

Interested in earlier trends and analysis of new power plant capacity? Check out our archive, illustrating how electricity generation has changed in previous quarters and years.

This article originally posted at ilsr.org. For timely updates, follow John Farrell on Twitter or get the Energy Democracy weekly update.