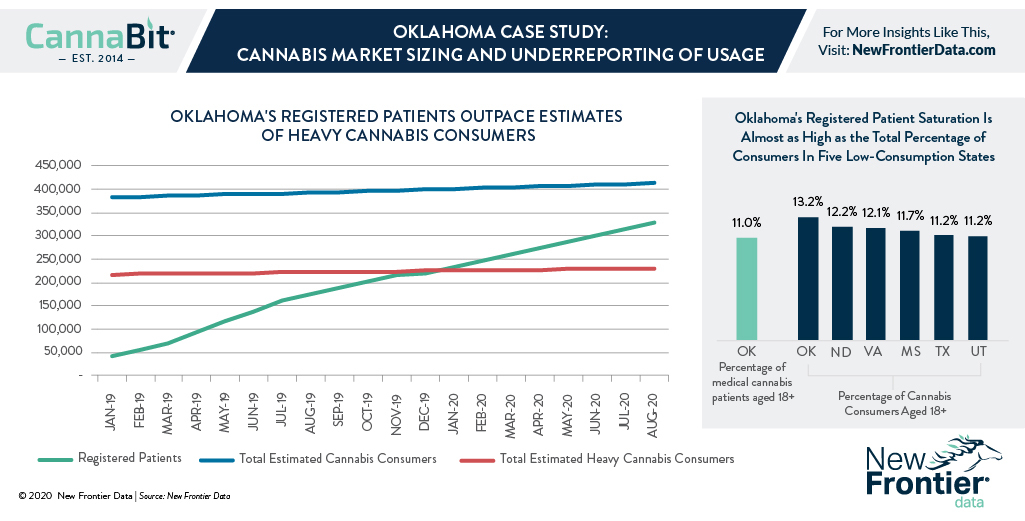 Marking the unparalleled growth of the state’s program, near the start of this month Oklahoma had registered nearly 330,000 medical cannabis patients. Even so, there is no sign of participation slowing down: Registered patients now account for about 11% of the Sooner State’s adult (age 18+) population, meaning that its medical program participants nearly match the state’s total cannabis consumer population. They had already exceeded Oklahoma’s estimated number of heavy (i.e., monthly or more frequent use) cannabis consumers.

What is being seen in Oklahoma illustrates complications which can arise from trying to measure cannabis use though self-reported surveys (e.g., SAMSHA’s National Survey on Drug Use and Health). A host of factors lend themselves to underreporting when measuring drug use with surveys, the most significant for U.S. respondents being the onus of federal prohibition.

With past-month usage rates at 7.8%, Oklahoma had the nation’s 8th-lowest reported rate of cannabis use. Nearly a dozen states (e.g., Vermont, Oregon, Maine, Colorado, etc.) report usage rates at 2x the levels seen in Oklahoma. Given the rapid expansion of public acceptance toward cannabis nationally (with a dramatic rise in aggregate usage rates seen nationwide), low reported numbers in Oklahoma and other historically, deeply conservative states raises the question of possible self-censoring that could be artificially suppressing reported usage rates.

Should the lower reported use rates across the bottom tier of state markets also reflect timidity about policy and stigma, then those usage rates are likewise underreported. As seen in markets that have turned legal (e.g., Vermont, Oregon, etc.), the margins of underreporting decrease with time following legalization.

For the time being, however, total estimates for cannabis market demand (being largely based on survey data) are prone to underreporting errors in the near term. Nevertheless, while estimates for the total U.S. population of cannabis consumers may skew conservatively in the near term, New Frontier Data anticipates that growing acceptance and normalization of cannabis use will lead to more precise estimates, and more complete, comprehensive, and accurate consumer reporting in coming years.