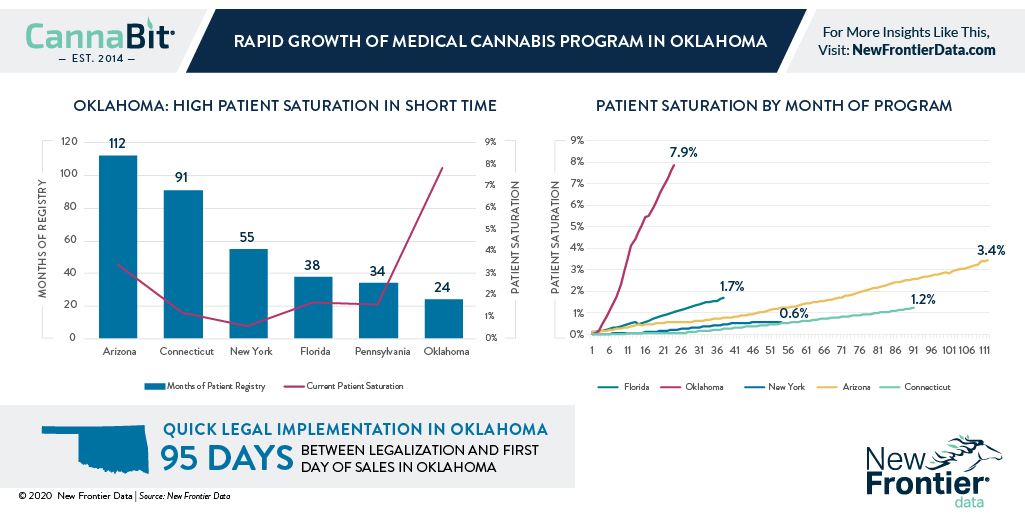 In July, the Oklahoma Medical Marijuana Authority (OMMA) announced its new patient participation numbers, revealing 7.9% of Oklahomans as registered among medical cannabis patients. That rate is more than 2x any other state, and achieved within 24 months of medical legalization.

This blog is the first among a short series to examine lessons learned from the state’s accelerated successes with its legal cannabis programs. This week, the focus is on factors contributing to the rapid growth of its medical market.

Oklahomans legalized medical cannabis in June 2018 by approving its State Question 788 with 57% of the vote. Sales began 95 days later.

The ballot initiative specified time frames which the state would need to comply with, which influenced the market’s expeditious launch. The text specified that business license applications needed to be available within 30 days of the initiative’s passage, that a regulatory office be open to receive applications within 60 days, and that the state review and rule on applications within 14 days of their receipt. By comparison, most legalized state markets have required their implementation of a cannabis board or committee within a year (or two) to begin drafting initial regulations and determine application criteria, etc. Thus, while the average period for implementation across other state medical markets exceeded three years, Oklahoma’s was operational within three months.

Oklahoma’s medical program was also unique in that the state had no limit on cannabis business licenses. Furthermore, the cost of a license in the Sooner State is $2,500 – a fraction of that assessed in New York (80x more, at $200,000), Maryland (50x, at $125,000), and Illinois (40x, at $100,000), respectively. In Oklahoma, participating businesses are not required to be vertically integrated (significantly lowering the barriers to entry), and municipalities are prohibited from revising zoning laws which would “prevent the opening of a retail marijuana establishment”, both of which have helped create a competitive state market that is quickly becoming saturated.

Note: In Colorado, Alaska, Oregon, and Washington, business license counts include both medical and adult-use type dispensary retail licenses. Oklahoma numbers are current as of July 2020, the other states listed were last updated March 2020.

By Oklahoma’s requirements, at least 75% of members, managers, board members, and owners must be state residents. An August 2019 law (HB 2612, or the “Unity Bill”) clarified that residency be defined as having lived in Oklahoma for at least two years immediately preceding application, or at least five continuous years during the previous 25. However, as of July 22, OMMA suspended its enforcement of that residency requirement (pending a lawsuit which would remove the provision requiring anything more than current residency). If the two-year clause is lifted, Oklahoma’s market may see an influx of businesspeople and investors (including those anticipating adult-use legalization), which would attract additional demand from nearby states without legal cannabis markets of their own.

The speed and flexibility with which State Question 788 allowed both for patients to access the market and for participating doctors to recommend cannabis likewise contributed to the state’s explosive growth in legal demand.

Oklahoma does not require qualifying conditions for medical recommendations, which effectively permits any board-certified physician in good standing to recommend cannabis to a patient for any reason according to “accepted standards a reasonable and prudent physician would follow when recommending or approving any medication.” Given the broad range of conditions for which cannabis has reportedly been therapeutic, the provision allows for high rates of participation among nearly 4 million Oklahomans (the state’s unique characteristics as a medical market will be detailed in a later report among this series).

Another contributing catalyst for Oklahoma’s medical market development came from cannabis businesses’ proactive work increasing patients’ awareness and participation. Since late 2018, registration drives have been organized to register patients having a need for medical cannabis but perhaps unable to afford a full-price doctor’s visit, or others who were unaware how to apply with the state. The events bring in doctors to meet with prospective patients and write low- or no-cost recommendations for those who qualify. Often, volunteers also help prospective patients apply on the OMMA’s online patient application portal. Offering such assistance effectively increases public awareness while lowering barriers to participate, and doubtless has contributed to Oklahoma’s historic rate of patient participation.

Medical cannabis licenses in Oklahoma are valid for two years (unlike most states, which require annual renewals). As with Oklahoma’s business applications, its ballot initiative specified that applications be made available within 30 days of its passage, with submitted applications approved or specifically denied within 14 days.

While licensed out-of-state medical cannabis patients are not granted full reciprocity in Oklahoma, they may apply for a temporary (30-day) license. Last May, Oklahoma’s HB 3228 would have allowed out-of-state residents to apply for a 90-day license, but that was vetoed.

Any further loosening of restrictions for out-of-state residents could have massive implications for the market. In its geographically central location among the lower 48 states, Oklahoma might represent a cannatourism destination for millions of Americans from neighboring and other nearby states lacking legal cannabis markets. With the northern Texas cities of Dallas and Fort Worth, each less than a 90-minute drive from its border, Oklahoma could cater to a combined population of more than 2 million — more than 50% that of the state itself.

Each legal state market is unique offering lessons to operators and regulators about how various elements affect a market’s performance. Two decades ago, only theories existed about which factors might make for successful legal markets.

Now, there are 34 legal markets (i.e., 33 states plus the District of Columbia), each an experiment to learn from. Aided by those insights, newer markets are generally coming online and ramping up faster while avoiding some early regulatory pitfalls, whether they were product restrictions (in Pennsylvania), hurdles for physician participation (in New York), or exorbitant taxes pricing patients out of the market (in New Jersey).

For its part, Oklahoma has been an example of acting quickly while lowering barriers to entry. Legally mandated, two-week turnaround times on business and patient applications made available just weeks after legalization greatly expedited establishment of foundational elements for the state’s industry. Likewise, affordable and unlimited business licenses – along with no requirements of qualifying conditions – promoted broad participation in the state’s market from both its supply and demand sides. Furthermore, businesses have led coordinated efforts to raise awareness and facilitate access, culminating in arguably the most successful launch of any state medical market yet seen.