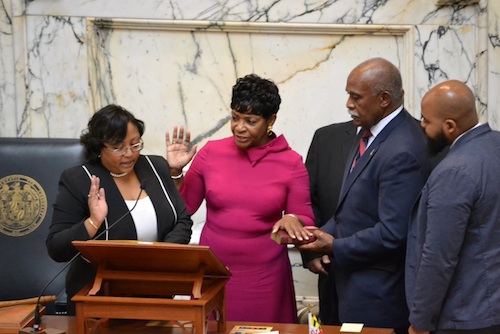 Del. Adrienne Jones (center) is officially sworn in as Maryland House speaker on Jan. 8. She is the first Black lawmaker and first woman to hold the position. (Brigette Squire/The Washington Informer)

ANNAPOLIS — The first day of the Maryland General Assembly session showcased history and optimism Wednesday as the two chambers officially swore in new presiding officers to begin the 90-day session.

Del. Adrienne Jones (D-Baltimore County) will serve as the first Black and first woman to lead the House of Delegates chamber after the death of her mentor, the late Michael Busch, who led the chamber from 2003 until his death in April.

Sen. Bill Ferguson (D-Baltimore City) was officially nominated as the first Senate president since Thomas V. Mike Miller Jr. took the reins in 1987. Miller, the longest-serving state Senate president in U.S. history, stepped down in October after announcing he has stage 4 prostate cancer.

“I think [Ferguson] is absolutely right about not having a choice in the matter that this is the time to correct the inequities we talked about for years and we have the power and authority to do it together,” she said. “I’m really encouraged that this is a message that’s resonating throughout this Senate chamber and throughout the House. There is a unity of purpose across both chambers. I’m excited to just be a part of it.”

Miller, who spoke from the Senate floor to nominate Ferguson, wasn’t shy to let his colleagues know there will be some strong discussion on one topic: public education.

More specifically, passing legislation based on recommendations to expand early childhood, raise teacher salaries and other education initiatives from the Commission on Innovation and Excellence in Education, also known as the Kirwan Commission.

The funding formula proposal stands at $4 billion — $2.8 billion from the state and the remaining $1.2 billion from county governments and Baltimore City.

“As vice chair of Budget and Taxation [Committee] last year, he stood up and fought for that Kirwan Commission,” he said. “We’re going to fully fund Kirwan. We’re going to make it happen.”

However, the two majority Black jurisdictions could be expected to pay more: Prince George’s at nearly $360 million and Baltimore City at $330 million by 2030.

Although Prince George’s lawmakers support the education plan and how it strives to close equity and racial gaps, some say there must be more discussion to decrease the county’s share.

The county’s $4.2 billion budget allots about 60 percent toward education, but has the largest number of students receiving free or reduced-price lunch in the state.

Del. Julian Ivey (D-District 47A) of Cheverly said one item within the proposed funding formula could affect areas with underserved communities.

“There is a clause that if you don’t adequately implement these recommendations, then the state could send 25 percent less of those promised dollars back to the local jurisdiction,” he said. “We could run into an instance because a jurisdiction does not have enough revenue … they would then be punished for not having enough money. We do champion that our dollars are used the right way, but we also want to make sure we are not punishing poor people for being poor.”

Meanwhile, the Maryland Black Caucus held a press conference to announce its legislative priorities, which include addressing a $577 million settlement offer in an ongoing HBCU lawsuit, continuing education for young people in the juvenile system, and reintroducing a bill for the state to open a pre-release center for women.

Another priority will be to push for equal representation in the medical cannabis industry, as only one Black owns a dispensary in the state.

Del. Darryl Barnes (D-District 25) of Upper Marlboro, who chairs the caucus, said a closed-door meeting will be scheduled Jan. 16 with an invitation for the state’s attorney general and industry officials “to come in and talk to us and give us a complete overview of where we stand to date and how do we proceed and move forward.”