One of the most exciting infrastructure developments within metropolitan America, the installation of over a million solar photovoltaic (PV) systems in recent years, represents nothing less than a breakthrough for urban sustainability — and the climate.

Get daily updates from Brookings

Prices for solar panels have fallen dramatically. Residential solar installations surged by 66 percent between 2014 and 2015 helping to ensure that solar accounted for 30 percent of all new U.S. electric generating capacity. And for that matter, recent analyses conclude that the cost of residential solar is often comparable to the average price of power on the utility grid, a threshold known as grid parity.

So, what’s not to like? Rooftop solar is a total winner, right?

Well, not quite: The spread of rooftop solar has raised tricky issues for utilities and the public utilities commissions (PUCs) that regulate them.

Specifically, the proliferation of rooftop solar installations is challenging the traditional utility business model by altering the relationship of household and utility—and not just by reducing electricity sales. In this respect, the solar boom has prompted significant debates in states like New York and California about the best rates and policies to ensure that state utility rules and rates provide a way for distributed solar to flourish even as utilities are rewarded for meeting customer demands. Increasingly, this ferment is leading to thoughtful dialogues aimed at devising new forms of policy and rate design that can—as in New York—encourage distributed energy resources (DERs) while allowing for distribution utilities to adapt to the new era.

However, in some states, the ferment has prompted a cruder set of backlashes. Most pointedly, some utilities contend that the “net-metering” fees paid to homeowners with rooftop installations for excess solar power they send back to the grid unfairly transfer costs to the utilities and their non-solar customers.

And so in a number of states, utility interests have sought to persuade state regulators to roll back net-metering provisions, arguing they are a net cost to the overall electricity system.  Most glaringly, the local utility in Nevada successfully wielded the cost-shift theory last winter to get the Nevada Public Utilities Commission to drastically curtail the state’s net-metering payments, prompting Solar City, Sunrun, and Vivint Solar—the state’s three largest providers of rooftop panels—to leave the Nevada market entirely. The result: New residential solar installation permits plunged 92 percent in Nevada in the first quarter of 2016. 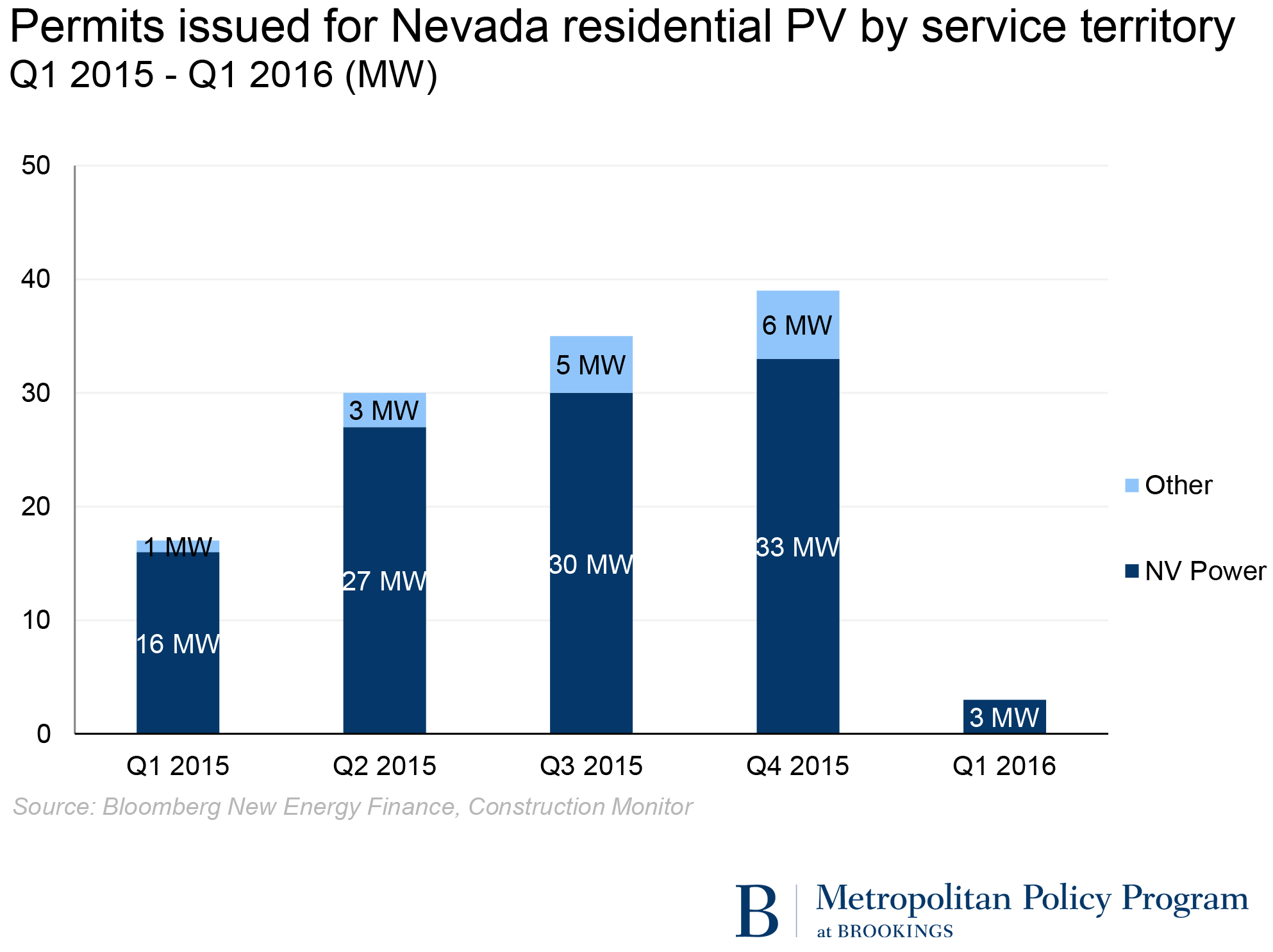 All of which highlights a burning question for the present and future of rooftop solar: Does net metering really represent a net cost shift from solar-owning households to others? Or does it in fact contribute net benefits to the grid, utilities, and other ratepayer groups when all costs and benefits are factored in? As to the answer, it’s getting clearer (even if it’s not unanimous). Net metering — contra the Nevada decision — frequently benefits all ratepayers when all costs and benefits are accounted for, which is a finding state public utility commissions, or PUCs, need to take seriously as the fight over net metering rages in states like Arizona, California, and Nevada.  Regulators everywhere need to put in place processes that fairly consider the full range of benefits (as well as costs) of net metering as well as other policies as they set and update the policies, regulations, and tariffs that will play a critical role in determining the extent to which the distributed solar industry continues to grow. 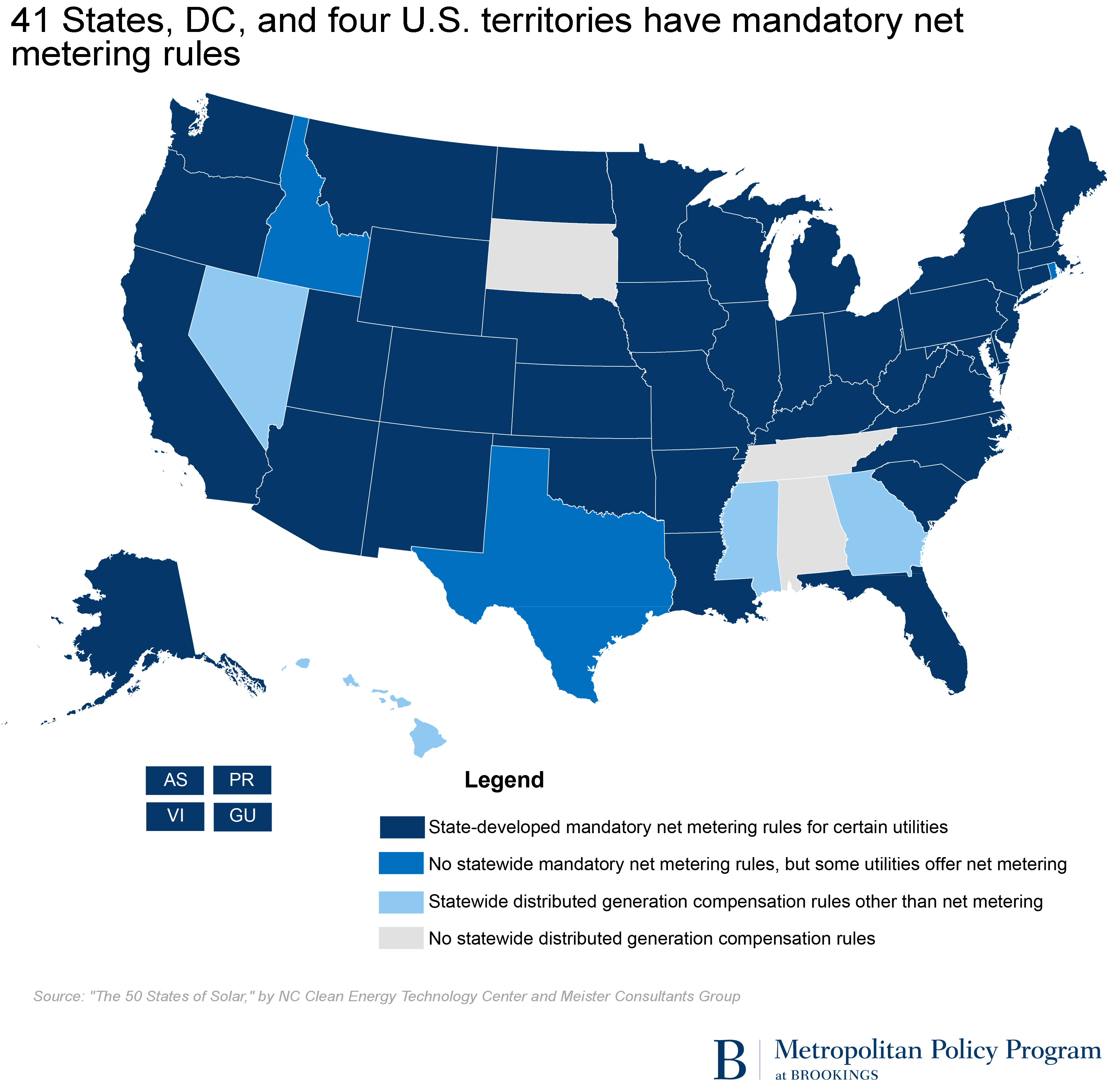 Fortunately, such cost-benefit analyses have become an important feature of state rate-setting processes and offer important guidance to states like Nevada.  So what does the accumulating national literature on costs and benefits of net metering say?  Increasingly it concludes— whether conducted by PUCs, national labs, or academics — that the economic benefits of net metering actually outweigh the costs and impose no significant cost increase for non-solar customers.  Far from a net cost, net metering is in most cases a net benefit—for the utility and for non-solar rate-payers.

Of course, there are legitimate cost-recovery issues associated with net metering, and they vary from market to market. Moreover, getting to a good rate design, which is essential for both utility revenues and the growth of distributed generation, is undeniably complicated.  If rates go too far in the direction of “volumetric energy charges”—charging customers based on energy use—utilities could have trouble recovering costs when distributed energy sources reach higher levels of penetration. On the other hand, if rates lean more towards fixed charges—not dependent on usage—it may reduce incentives for customers to consider solar and other distributed generation technologies.

Moreover, cost-benefit assessments can vary due to differences in valuation approach and methodology, leading to inconsistent outcomes. For instance, a Louisiana Public Utility Commission study last year found that that state’s net-metering customers do not pay the full cost of service and are subsidized by other ratepayers. How that squares with other states’ analyses is hard to parse.

Nevertheless, by the end of 2015, regulators in at least 10 states had conducted studies to develop methodologies to value distributed generation and net metering, while other states conducted less formal inquiries, ranging from direct rate design or net-metering policy changes to general education of decisionmakers and the public. And there is a degree of consensus.  What do the commission-sponsored analyses show? A growing number show that net metering benefits all utility customers:

These generally positive PUC conclusions about the benefits of net metering have been supported by research done by a national lab and several think tanks. Important lab research has examined how substantially higher adoption of distributed resources might look.

In a forward-looking analysis of the financial impacts of net-metered energy on utilities and ratepayers, Lawrence Berkeley National Lab found that while high use of net-metered solar generation may decrease utility shareholders’ earnings, it will have a “relatively modest” impact on ratepayers. The report examined solar penetration levels that are “substantially higher than [those that] exist today” — 10 percent compared to today’s 0.2 percent — and concluded that “even at penetration levels significantly higher than today, the impacts of customer-sited PV on average retail rates may be relatively modest.” The report further said that utilities and regulators “may have sufficient time to address concerns about the rate impacts of PV in a measured and deliberate manner”

Similarly, a growing number of academic and think tank studies have found that solar energy is being undervalued and that it delivers benefits far beyond what solar customers are receiving in net-metering credits:

In short, while the conclusions vary, a significant body of cost-benefit research conducted by PUCs, consultants, and research organizations provides substantial evidence that net metering is more often than not a net benefit to the grid and all ratepayers.

As to the takeaways, they are quite clear: Regulators and utilities need to engage in a broader and more honest conversation about how to integrate distributed-generation technologies into the grid nationwide, with an eye toward instituting a fair utility-cost recovery strategy that does not pose significant challenges to solar adoption.

From the state PUCs’ perspective, until broad changes are made to the increasingly outdated and ineffective standard utility business model, which is built largely around selling increasing amounts of electricity, net-metering policies should be viewed as an important tool for encouraging the integration of renewable energy into states’ energy portfolios as part of the transition beyond fossil fuels. To that end, progressive regulators should explore and implement reforms that arrive at more beneficial and equitable rate designs that do not prevent solar expansion in their states. The following reforms range from the simplest to the hardest:

Options also exist for utilities to address the challenges posed by net metering:

Ultimately, distributed solar is here to stay at increasing scale, and so state policies to support it have entered an important new transitional phase. More and more states will now likely move to update their net-metering policies as the cost of solar continues to drop and more homeowners opt to install solar panels on their homes.

As they do that, states need to rigorously and fairly evaluate the costs and benefits posed by net metering, grid fees, and other policies to shape a smart, progressive regulatory system that works for all of the stakeholders touched by distributed solar.