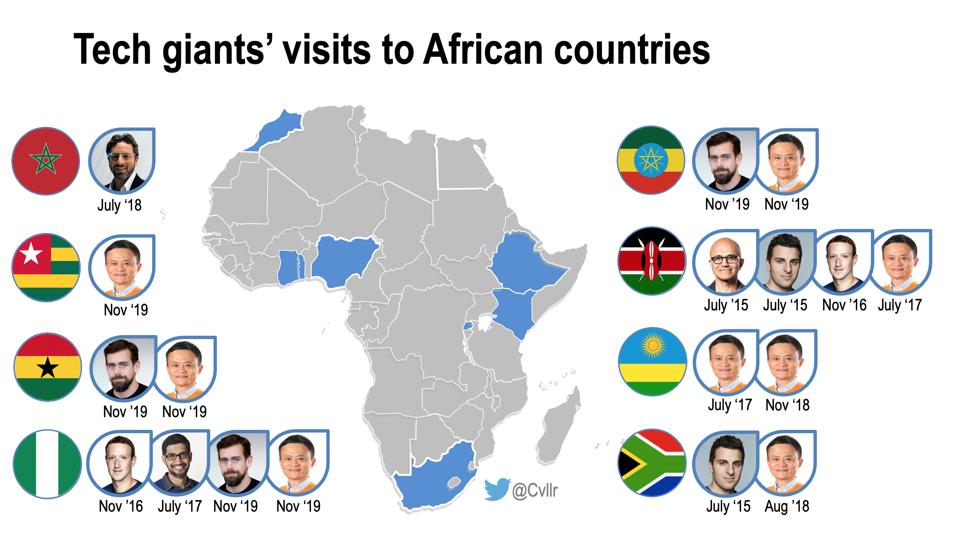 As Twitter CEO Jack Dorsey demonstrated with his month-long trip in November, the importance of Africa for global companies keeps growing.

The increasingly frequent visits by high-level CEOs shows the importance of the continent, says Max Cuvellier, head of programmes at the GSM Association (GSMA) Mobile for Development (M4D).

Since 2015, the heads of the world’s biggest tech businesses have visited Africa. It started with Airbnb’s Brian Chesky and Microsoft’s Satya Nadella in 2015, with Facebook’s Mark Zuckerberg visiting Kenya and Nigeria in 2016. Google’s CEO Sundar Pichai came in 2017, while then Alphabet’s Sergey Brin visited the following year. Alibaba co-founder Jack Ma has come to Africa in 2017, twice in 2018 and again this year.

“What I like the most when I look at tech giant CEO visits is that they seem to recognise the potential of the continent not only as a market, but as a source of innovation and talent,” Cuvellier told me. “They dedicate more and more time on these trips to meeting local entrepreneurs, discussing emerging technologies with local experts and going to universities to interact with local students. Some might too quickly dismiss this as anecdotal, but when Jack Ma awards you with a prize (Temie Giwa-Tubosun of LifeBank in Nigeria last week) – or Jack Dorsey endorses you on social media as ‘the most incredible soul in all the world’ (Betelhem Dessie of iCog Labs in Ethiopia), I like to believe these things reflect positively not only on the individuals, but on the whole community.”

Cuvellier has created a map of these CEO visits which demonstrate “things are getting serious”.

Although it might be easy to dismiss the importance of these trips, especially as many people only see a few quotes or a handful of selfies with locals. The most popular article on Brian Chesky’s visit to South Africa in 2015 – the first visit recorded on the map – focuses on how short his visit was, says Cuvellier.

“But I do believe that the trips in themselves are an indication of growing interest in the continent from ‘tech giants’. Jack Ma is on his third visit to the continent since July 2017 and has now visited seven countries, Jack Dorsey just spent a full month in Africa.”

By comparison, in the same period the Chinese president only made one visit to Africa (visiting four countries in July 2018) and none by the American president.

“Most importantly, and beyond the visits, actual commitments are made: Google’s first AI lab in Africa (in Accra, Ghana) was announced by Sundar Pichai in June 2018 and was opened earlier this year; while Ethiopia and the Alibaba Group just inaugurated a global trade platform on Monday. I am hopeful the deals and the partnerships, not just the trips, will keep coming.”

He highlights that much of Africa’s innovation successes are based on the widespread adoption of mobile phones.

“These tech giants wouldn’t be looking at Africa if it weren’t for mobile technology,” says Cuvellier.

As of July 2019, the GSMA estimated there were 456-million unique mobile subscribers in sub-Saharan Africa alone, and it remains the fastest growing region globally (4.6% year-on-year). Some 52% of these mobile subscribers (239 million) use mobile internet on a regular basis.

Connectivity is also getting much better:  in 2019, 3G has overtaken 2G to become the leading mobile technology in the region.

“Mobile money – with 396-million registered mobile money accounts – provides access to financial services to many. Last but not least, the demographic bulge will result in large numbers of young consumers becoming adults and owning a mobile phone for the first time. They will account for the majority of new mobile subscribers and, as ‘digital natives’, will significantly influence mobile usage patterns in the future, not to mention they often are a key target of ‘tech giants’.”

The full list, according to Cuvellier, of tech CEO visits: