While the electric vehicle manufacturer tries to meet its production targets for its latest luxury sedan, company statements maintain that the solar operation — obtained through its acquisition of SolarCity in 2016 — remains important to Tesla.

“Our energy products are critical to our mission to accelerate the world’s transition to sustainable energy, and we continue to expect that Tesla’s solar and battery business will be the same size as automotive over the long term,” said a Tesla spokesperson.

As Tesla continues to pursue sales of its solar products in its own stores, Home Depot will continue a partnership with Sunrun, Reuters reported. As direct competitors, Sunrun and SunPower have not seen the same declines in solar as Tesla, according to a recent analysis from the Motley Fool. The two developers have grown their residential solar business and increased their market share while Tesla plans for continuing layoffs.

It’s unclear what impact the solar tariffs levied by the Trump administration will have on installed capacity in the United States, particularly given solar’s falling costs.

Details of how many employees will be affected by the solar facility closures remain unclear. Reuters reported that SolarCity offices in California, Maryland, New Jersey, Texas, New York, New Hampshire, Connecticut, Arizona and Delaware were targeted for closure. Based on Tesla’s comments, cuts across its solar sector will be seemingly on par with the 9% cuts across the company. 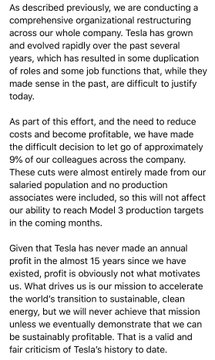 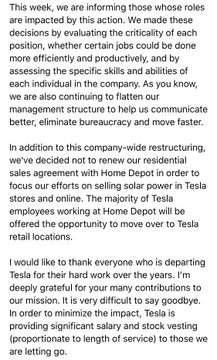 Tesla plans to expand in-store access to its SolarCity panels, which the company previously stated as being available in over 90 of its U.S retail locations. “Over the past couple of quarters, we have increased efforts to sell energy generation and storage systems in Tesla stores,” the company wrote in its Q1 shareholder letter this year.