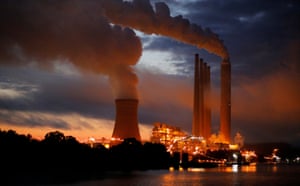 I have spent the past five years researching states’ efforts to roll back clean energy laws. This Ohio bill – which Governor Mike DeWine signed the day it was passed – is the worst yet.

The legislation reflects an unfortunate national pattern: electric utilities pushing to delay climate action, bolstered by a president similarly interested in dragging our country’s feet. For years, FirstEnergy and AEP have been trying to dismantle Ohio’s clean energy policies and bail out their dirty coal plants. Since President Trump took office, these companies have found a receptive audience.

FirstEnergy’s CEO has met with Trump personally. Last year, the company asked his administration to invoke emergency powers to save its struggling coal and nuclear plants. Just a few months ago, an Ohio Republican operative who has a major role in Trump’s 2020 re-election campaign called several House Republicans who were on the fence to persuade them to vote for HB 6.

These companies have spent several million dollars on deceptive advertising, lobbying and campaign contributions to help elect politicians sympathetic to their cause.

In return, these politicians have proven dutiful beneficiaries, working diligently to secure almost a billion dollars of ratepayer subsidies for FirstEnergy and AEP.

As lobbying goes, not a bad return on investment. This isn’t just happening in Ohio. Utilities across the country are pushing to delay climate action and stall the growth of renewables, which are already a cheaper source of electricity than continuing to operate three-quarters of US coal plants.

Last week in Florida, the CEO of an electric utility called for large charges on customer bills in order to make solar customers “go away”. The Sunshine State gets a measly 3% of its electricity from renewables. Yet Florida utilities still fight customers trying to install solar.

In Louisiana, the utility Entergy actually paid actors to show up at a New Orleans city council meeting to secure approval for a new natural gas plant.

And in Arizona, the state’s largest electric utility – Arizona Public Service – has poured more than $50m into elections, including for its own regulator, often lying about its involvement. Once its favored politicians took office, the utility succeeded in rolling back solar policies.

These same electric utilities have funded climate denial for decades. Now they’ve moved on to delay: more than half the country’s highest-emitting utilities are slow-walking their own plans to decarbonize over the next decade. Some major utilities have zero plan to reduce carbon emissions.

When a private electric utility chooses to spend its guaranteed profits on denial or delay, the public cannot choose to stop buying its power. There is no exit from a monopoly.

In the Ohio case, these utilities started their attacks on renewables in 2011. By 2014, the state had frozen its clean energy targets and made it nearly impossible to build wind energy. This latest change will erode what little policy is left. The law will eliminate clean energy targets and gut an energy efficiency program that has saved the state $5bn – instead cementing Ohio’s position at the bottom of national clean energy rankings. With only 2.5% of its electricity from renewable energy sources last year, the state is in 49th place.

In a truly Orwellian doublespeak, Ohio’s latest policy is called the Clean Air Program. The lawmakers don’t even have the guts to call the law what it is – a coal plant subsidy – and instead refer to these dirty sources as “legacy assets”.

Some advocates have focused on the parts of the bill that would subsidize nuclear, and the legislation’s small offerings for solar – both carbon-free sources of power. Yet the bill provides almost twice as much funding for coal as clean energy.

This is all occurring as Ohio bakes in another heatwave. As farmers throughout the state struggle to plant crops under record rainfall and flooding. As poor communities surrounding these coal plants continue to breathe toxic air.

The climate crisis is on Ohio’s doorstep. Yet the corporations running these ancient coal plants want to keep them operating until 2040, when they will be 85 years old. These plants are long past retirement age.

The next time you feel that you are to blame for climate change – because you forgot to hit the light switch, or you took that flight to see your ailing mother – remember the Ohio electric utilities and their coal subsidies. Remember the politicians who gave them this billion-dollar bailout after receiving personal favors, like a flight to Trump’s inauguration on a corporate jet. And know that one day after signing this bill, Ohio Governor DeWine attended a Trump fundraiser hosted by coal baron Bob Murray.

Fighting the climate crisis is not about purifying yourself. It’s about dismantling corporate power. Electric utilities are a great place to start.

… because that is when the US withdraws from the Paris climate accord, on 4 November. Five years ago nearly 200 countries committed to a collective global response to tackle the climate crisis. But when Donald Trump took office he announced that the US would leave the Paris agreement. On the one issue that demands a worldwide response to help safeguard the Earth for future generations, the US has chosen to walk away. The president is playing politics with the climate crisis – the most defining issue of our time.

The stakes could scarcely be higher and with your help we can put this issue at the center of our 2020 election coverage. The election will be a referendum on the future of democracy, racial justice, the supreme court and so much more. But hovering over all of these is whether the US will play its role in helping take collective responsibility for the future of the planet.

The period since the Paris agreement was signed has seen the five hottest years on record. If carbon emissions continue substantial climate change is unavoidable. The most impacted communities will also be the most vulnerable. Instead of helping lead this discussion the White House prefers to roll back environmental protections to placate the fossil fuel industry.