The president is hoping to make electric vehicles more affordable to turn a niche product into one with mass appeal. 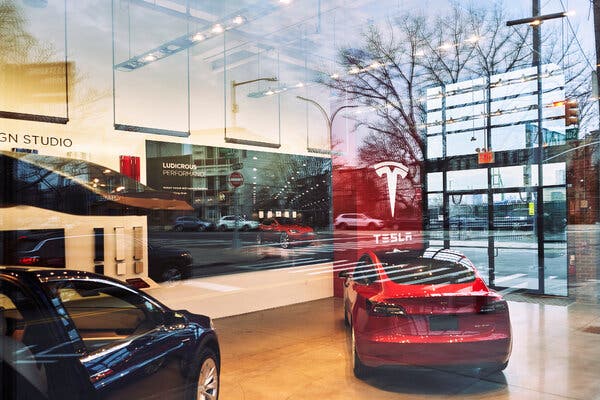 A Tesla dealership in New York. While their prominence is rising, electric vehicles make up just 2 percent of the new car market.Credit…

President Biden is a muscle-car guy — one of his most prized possessions is a 1967 Corvette that he got from his father. But he’s trying to make this an electric vehicle world.

The $2 trillion infrastructure plan that he unveiled on Wednesday is aimed at tackling climate change in part by spending up to $174 billion to encourage Americans to switch to cars and trucks that run on electricity, not gasoline or diesel. That is a large investment but it might not be enough to push most Americans toward E.V.s.

Despite rapid growth in recent years, electric vehicles remain a niche product, making up just 2 percent of the new car market and 1 percent of all cars, sport-utility vehicles, vans and pickup trucks on the road. They have been slow to take off in large part because they can cost up to $10,000 more than similar conventional cars and trucks. Charging E.V.s is also more difficult and slower than simply refilling the tank at far more prevalent gas stations.

Mr. Biden hopes to address many of those challenges through federal largess. He aims to lower the cost of electric vehicles by offering individuals, businesses and governments tax credits, rebates and other incentives. To address the chicken-and-egg problem of getting people to try a new technology before it is widely accepted, he hopes to build half a million chargers by 2030 so people will feel confident that they won’t be stranded when they run out of juice. And he is offering help to automakers to get them to build electric vehicles and batteries in the United States.